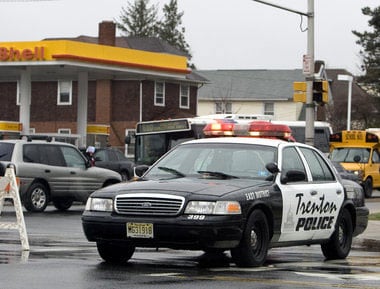 A little over halfway through the year, the city of Trenton, New Jersey, has already been filled with violence and bloodshed. It’s seen 20 homicides and nearly 10 times as many non-fatal shootings. Violence has erupted and spilled into the city streets, while citizens and even the police director admits that the withering police force is one major factor of the carnage, which only continues to escalate.

Ravenell is no stranger to the violence in the city either. One of his parishioners was struck by a bullet in front of his church during a drive-by in October. Ravenell said that the criminals in the area aren’t concerned about getting caught by the police either.

President of the Policemen’s Benevolent Association, George Dzurkoc expressed that with the absent police force, criminals think they can just “run amok.”

The disappearing patrols started with massive layoffs in September 2011, which removed about 100 positions. Since then it’s been a struggle to keep officers hired and departments are unable to recruit new officers fast enough to fill the positions of retirees.

Union leaders and some citizens say that the hardest hit units are the ones that made in biggest difference in deterring crime. The department’s street-level anti-crime unit, which was once nationally known for being proactive in reducing crime, was cut last December by Rivera. This left officers with little option but to respond to crime after it happens rather than working at the street level to actually decrease it. The controversial cut has left some unhappy with Rivera. But he stands behind the move.

“With an approximate 40 percent reduction of workforce since 2011, we don’t have the luxury of having numerous officers specifically assigned to aggressively and consistently patrol our high crime areas that are repeatedly identified through intelligence,” Rivera said. “While our authorized manpower strength was decreased significantly, our high volume of calls for services remained consistent.”

Additionally, since the massive cut, there’s been nothing but an increase in violent crimes. According to the police department, they responded to 73 shootings in 2009 and it dropped to 71 in 2010. But after the force was cut in 2011, the number nearly doubled to 134 and increased again to 167 last year. By the end of June this year Trenton had already experienced 94 shootings.

Dzurkoc also points out that there’s a whole other breed of criminals that he didn’t see when he served in the street unit from 1992 to 2000. The “community gun” is practically non-existent now. Where they once “were scared to death to carry guns,” now every criminal on the street carries a gun in his waistband.

“Their network is a lot more sophisticated and a lot more organized than they were back then,” Dzurkoc said. “We aren’t.” Increased technology, such as cell phones, has not only brought convenience to citizens, but also benefited the corner drug dealers as well.

While the Trenton Police Department futilely tries to reduce violence, with the shortage of needed resources, there’s little that can be done to keep the guns out of the hands of violent criminals. “The lack of a street crimes unit has allowed exactly what the director said. It’s opened Pandora’s Box,” Dzurkoc said.

And it’s not just the guns and the technology that’s evolved on the streets; it’s the attitudes as well.

“It’s the culture, just the time we’re in,” Ravenell said. “Certainly the revenge concept is alive. No one is going to take the last hit. ‘You got my boy, I’m going to get yours.’ I think the idea of justice is more important than human life.”