Comic writer and illustrator Maximilian Uriarte has announced a big new project, “The White Donkey,” the first and considerably more complex graphic novel that will expand the Terminal Lance world as it explores the life of modern Marines.

“This is a story about a Marine, written and illustrated by a Marine,” said Uriarte.

“The White Donkey” is a serious graphic novel following the lives of Terminal Lance characters Abe and Garcia and touches on weighty subjects like PTSD, suicide and the stress of living and fighting through a war.

Uriarte sought to crowd-source the novel and posted the project to Kickstarter this weekend, and “The White Donkey” has already met Uriarte’s goal of raising the $20,000 needed to publish his graphic novel.

Uriarte has been working on the project’s concept for several years. At this point the book has been written but not illustrated. Uriate is raising the money to focus on making the illustrations for the 150- to 160-page graphic novel full time.

“I’ve been writing the story for the last three years,” said Uriarte on the project website. “Fans of the Terminal Lance webcomic will recognize Abe and Garcia, the central characters of the strip. However, these characters at the heart of this story were created because of ‘The White Donkey,’ and not vice versa. I introduced the characters into the webcomic because I knew I wanted to make this book. In many ways, ‘The White Donkey’ is the ultimate realization of the Terminal Lance name.”

“The White Donkey seeks to illustrate the surreal journey of these subjects in the form of a graphic novel; inspired heavily by my own experiences in Iraq and otherwise.”

Right now the only way to purchase a copy of the first limited-edition run of “The White Donkey” is by backing the project through Kickstarter. 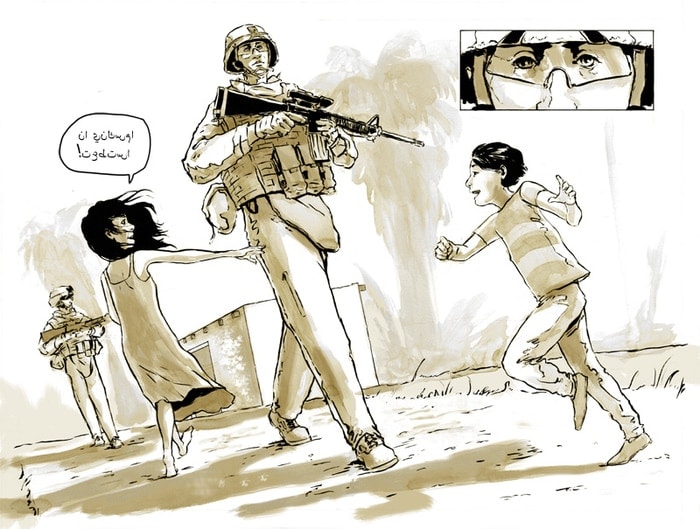 It takes a pledge of $40 to get a copy of the print version of “The White Donkey” although backers who pledge $25 will receive a digital copy of the graphic novel.

Backers may pledge as little as $1 all the way up to $5,000, with other goodies like stickers, limited-edition coins and T-shirts in addition to print and digital copies of Uriare’s works.

And if anyone backs the project with the full $5,000 Uriarte will fly out to meet them, buy them a drink and graciously accept a “ball-tap” on camera, to be posted on YouTube for all Terminal Lance fans everywhere.

All backers who pledge $10 or more will receive a special thank-you mention in the book.

With the project completely backed and then some, Uriarte will also commit to a handful of “stretch goals” which include redesigning his website and working on some new animated works.

The Kickstarter portion of the project will continue to accept backers through next month. If you’re a Terminal Lance fan, you know what you have to do. And if you’re not familiar with the comic, check it out. You don’t have to be a Marine to appreciate it — although it certainly helps.