EDITORIAL: Why should Young Black Men identify with Trayvon Martin?

The morning after George Zimmerman walked out of a Florida courtroom a free man, I stood in my driveway holding two gnarled-9mm-hollow-point bullets in my hand. Doctors had removed them from one of my former wrestlers just a few months ago. His name isn’t Dudley, but that’s what I’ll call him. I had no idea I would see Dudley yesterday, but throughout the Zimmerman trial, I thought about him particularly, as well as the other young men who share a part of my life.

Dudley made a stupid decision earlier this year–supposedly to hustle up $300 to go back to school. His irrational crime nearly cost him his life. Three gang members robbed him during the deal. Dudley fought back, and they shot him four times. Stray bullets sparked off the street illuminating the darkness as Dudley ran for his life that night. Two bullets ripped into his right calf causing him to eventually stumble to the ground after he lost feeling below his knee. He scurried for cover under a car and discovered his shirt was soaked in blood–the result of two bullets that had entered his chest. One remains buried there. Lying under the car, Dudley dialed 911. Police and paramedics arrived a few minutes later and saved his life.

Dudley is not the only young man I know personally who has been shot. Like Dudley, the others were shot while committing crimes. None of them were simply minding their own business. The others kids continue risking their lives in crimes. Dudley works at The Waffle House. He will return to school next month. That so many people are promoting Trayvon Martin as the poster child for the black community angers me. Ignorance of all the facts explains much of their psychosis, but worse, a significant number don’t care what the facts are and feign indignation at anyone who points them out.

Poor judgment, ill-advised decisions, risky behavior, and especially lawfully exiting one’s car—in a potentially volatile situation—do not justify crime—period. No crime occurred until someone threw the first punch in the Zimmerman case. No one deserves being attacked because another person resents the way someone else looks at him. Regardless, I hope the Martin supporters never suffer an assault, mugging, robbery, rape, injury, or death because of their own bad decision to legally exit a car and to legally watch where someone is going.

If they do ever make a questionable decision and find themselves fearing for their lives or fearing grave bodily harm, I hope they do legally have guns to defend themselves. And if they were to survive poor judgment that puts them in a dangerous encounter, I hope that they would not be victimized again by a legal system with a mob mentality for vengeance on behalf of their attackers. Arresting people who were clearly defending themselves from malicious wounding is outrageous—who cares if the attacker was armed with cotton candy and a candy apple before the attack? 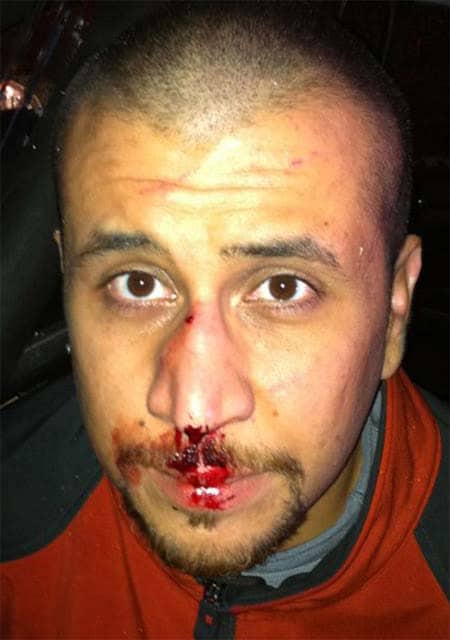 George Zimmerman after the attack by Trayvon Martin, showing a broken nose.

The ugly reality is that Trayvon Martin was not an angel on earth—none of us are. But Martin clearly was a young man struggling with making good decisions—let alone legal ones. Discovering ugly facts about Martin not introduced at trial takes a matter of seconds on the Internet. Only those who have no interest in the truth expect the public not to notice.

Two people made bad decisions that night; one made an illegal decision that turned the encounter violent. Violence led to tragedy. People should avoid bad behavior because it is the right thing to do. Committing violent crimes can cost people their lives when law-abiding citizens are armed. That’s the lesson to promote concerning this tragedy.

All the vultures allegedly representing and promoting the Martin family disgust me. They have rushed in to feed off Martin’s death. Do these scavengers truly value young black men, or do they value the fame and profit earned off turning their tragedies into lawsuits and personal power?

This case affected me deeply because of the relationship I share with so many black kids. But I have learned it has nothing to do with what it first appeared. No, none of the kids I know are Trayvon Martin. Especially, not the young man I identified as Dudley. Most of their lives are already tough enough. Pressuring them to identify with Martin is insanity.