Picture of the damage done to Men’s Wearhouse on Broadway in #Oakland. Shattered glass covering the sidewalk. pic.twitter.com/5e4oamJSIX

“While some Trayvon Martin supporters took to the streets late Monday night to bash in the head of an innocent waiter at an Oakland restaurant, others achieved ‘justice’ by smashing up the windows at a Men’s Wearhouse store.”

Rioters in Oakland trashed a Men’s Warehouse store in protest of the George Zimmerman “not guilty” verdict for the shooting death of Trayvon Martin.

Men’s Warehouse spokesman and founder George “I Guarantee It” Zimmer was to blame. His name was just too damn similar to Zimmerman’s. That bastard. 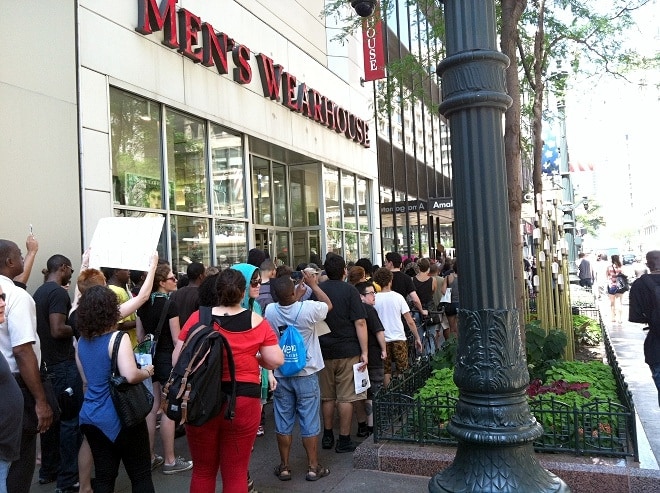 Martin sympathizers crossed paths with a Men’s Warehouse in Chicago, but refrained from vandalizing the clothes shop.

As it is, George Zimmer is no longer the Men’s Warehouse spokesman and he has resigned from the chain’s board of directors.

Clearly the protesters who smashed the Men’s Warehouse last night were angry about George Zimmer being ousted as CEO.

“‘Mr. Zimmer had difficulty accepting the fact that Men’s Wearhouse is a public company with an independent board of directors and that he has not been the chief executive officer for two years,’ the board said in a statement. ‘He advocated for significant changes that would enable him to regain control, but ultimately he was unable to convince any of the board members or senior executives that his positions were in the best interests of employees, shareholders and the company’s future.'”

Men’s Warehouse does not believe that George Zimmer and George Zimmerman are the same person, although there have been rumors that even they are often confused, with the -man/no-man suffix being the root of their own inability to tell the two completely different men apart.

The White House is expected to issue a statement later this week to see if there really is any difference between George Zimmer and George Zimmerman, and based on their findings, Attorney General Eric Holder may issue guidelines as to whether or not federal charges against George Zimmer constitute double jeopardy.