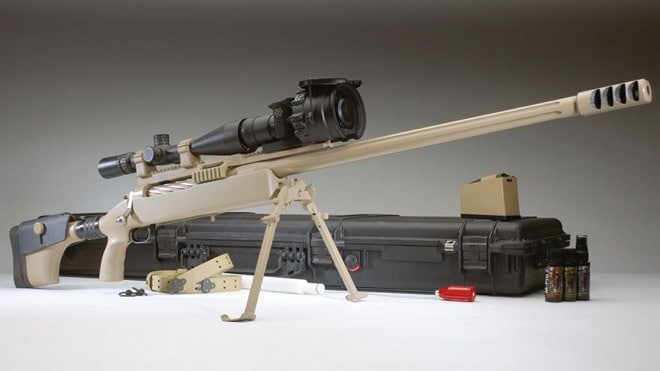 A McMillan .50 BMG rifle pictured with a non-smart, or dumb scope.

TrackingPoint recently announced that they were working on a next-generation “precision guided rifle” — a smart scope-equipped long-range sniper rifle than can track and fire on targets with just a little human assistance — and the first details are starting to roll in.

We knew that they were looking to exceed the range of their first family of scopes which had a maximum range-finding ability of about 1,000 yards. Their next PGR or “super gun” as they’re calling it is expected to be able to reliably hit targets out to 3,100 yards.

In order to do this they’re turning to one of the leaders in long-range shooting, McMillan. TrackingPoint already uses McMillan products for their XS3 PGR, but they’re thinking about building their super gun using a complete McMillan .50 BMG rifle.

“As an applied technology company at the forefront of the firearms industry, we at TrackingPoint need to consistently push ourselves to innovate above and beyond even our own expectations,” said Jason Schauble, TrackingPoint CEO. “Our ‘Super Gun’ project will push the boundaries of perception in the firearms and shooting communities. In the process we hope to find inspiration for a whole new generation of tech applications.”

The current record for a confirmed long-distance hit is held by a British soldier, Corporal of Horse (CoH) Craig Harrison, who earned a confirmed kill at 2,707 yards in November, 2009 during the war in Afghanistan with an Accuracy International L115A3 chambered for .338 Lapua Magnum. Unconfirmed claims have been made for a shot of 3,079 yards in October, 2012 by an Australian soldier using a .50 caliber rifle. The shot, if it gets confirmed, will be the standard to which TrackingPoint holds its super gun capabilities.

Although .338 Lapua Magnum has some advantages over .50 BMG when it comes to sniper rifles, there’s no doubting that the .50 caliber cartridge remains ranks most popular in the world of long-distance shooting.

TrackingPoint’s move to add a .50 BMG rifle was really a foreseeable eventuality. While they have a history with McMillan they’re not confirming anything just yet, just putting McMillan out there. There are many companies that make stellar .50 BMG sniper rifles large and small and in the end the next PGR could have some other name on the receiver.

Whichever company TrackingPoint taps to base their super gun on, when the it becomes available it will no doubt be in demand, from tech-savvy shooters who want the most advanced hardware available, to big game-hunters who want to ensure the perfect cold shot (and even more likely, big game-hunting resorts who cater to hunter-tourists who often need all the help they can get) and of course, militaries everywhere.

With smart scopes that tap out at 1,000 yards or less, TrackingPoint had a very interesting but somewhat novel product on their hands. Certainly appealing to long-range hunters and the aforementioned technologically-inclined shooters, 1,000 yards is too short for many military sniping applications, where snipers are regularly called upon to fire on targets much farther away.

This next generation of smart scopes, should their range really get out past 3,000 yards — as far as 1.76 miles — and they continue to track targets as well (and most likely better than) the current generation of PGR, then TrackingPoint needs only to prove that these guns can withstand combat environments before they become part of our special forces’ arsenal.

The only thing holding them back there is the cost. Currently TrackingPoint’s PGRs run upwards of $25,000 each. At that price, even the military might want to just spend money on training.