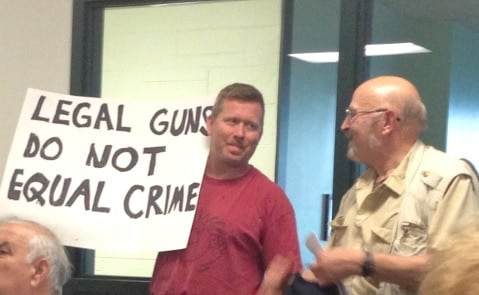 Local activists reportedly attended the meetings and voiced their opinions about an Assault Weapons Ban. This Evergreen Park man brought a homemade sign to Monday’s village board meeting to further expand his point. (Photo credit: Patch.com)

The majority of suburbs surrounding the City of Chicago have voted against a proposed ban on assault weapons within their municipal limits this week, while the city itself aims to expand its ban even further.

Following the passage of the state’s new concealed carry law, home rule communities were given a 10-day window to either approve a ban on “assault weapons,” revise current ordinances to the way they see fit (as long as their laws obey the state and federal constitutions), or just simply follow state law.

The ban itself varies and in most areas local leadership has to vote on two measures. The first is banning certain types of semi-automatic rifles and shotguns, and the second would require some sort of safe storage for those firearms.

Since the Firearm Concealed Carry Act passed, officials in more than 50 municipalities surrounding Chicago have reviewed their options and, according to the Illinois State Rifle Association, at least 30 have rejected the ban, 13 have accepted it or some form of it, and the rest have yet to vote or they simply deferred the vote to later this week. The deadline for the decision is Friday.

While some of the 13 aforementioned communities passed the whole shebang, others simply approved safe storage and some just got creative. 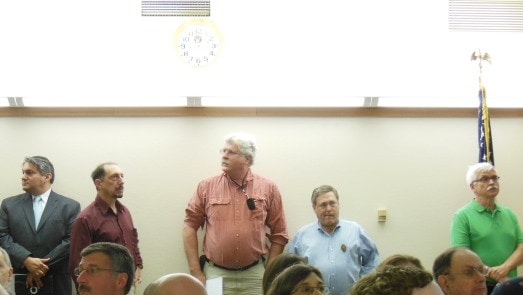 Skokie residents line up to opine in front of the village’s mayor and board members. They did allow men without glasses and mustaches to speak as well. (Photo credit: Patch.com)

Buffalo Grove, for example, redrafted the assault weapons ban to only ban machine guns — the same machine guns that few civilians own and are already heavily regulated by the federal government. But the town just felt they had to do something and exercise home rule.

“(The state) put us in that position,” Buffalo Grove Mayor Jeffrey Braiman told the Chicago Tribune. “We gave us an opportunity to preserve home-rule rights.”

So now residents in Buffalo Grove have 90 days to turn in their machine guns to police, or modify their machine guns by removing the automatic option. Failure to comply will result in a $500- to $1,000-fine, the Tribune reported.

“If someone (transporting a firearm) were to start at the state line and speed down Sheridan Road going 100 mph, if they got stopped anywhere like Waukegan or Zion, they’d get a speeding ticket,” Waukegan’s Second Ward Ald. Thomas Koncan told the Sun-Times. “If they got stopped in North Chicago, they’d get arrested for carrying a weapon that is banned.”

This morning, Chicago Mayor Rahm Emanuel and the Chicago City Counsel discussed the city’s assault weapons ban with hopes of expanding it and toughening penalties for some firearms violations near schools, despite law enforcement officials questioning the value of an assault weapons ban as the majority of gun crime is committed with handguns.

While final details were not released as this article went to print, officials reportedly wanted to add more guns to the ban list and finalize a “school safety zone” ordinance that would raise penalties for certain gun crimes near schools and along designated “Safe Passage” routes.

Also, possession of “assault weapons” near schools would carry stiffer penalties and jail time, according to the Tribune. We’ll have more on this story when details are available.