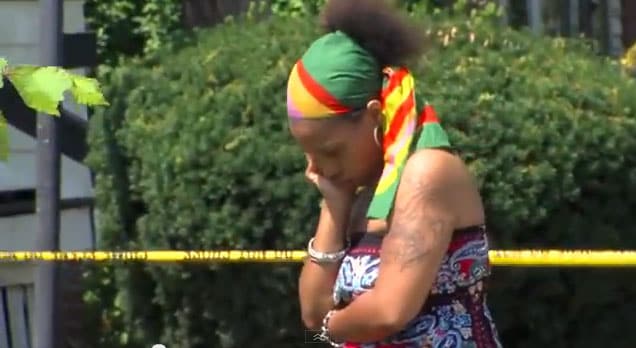 The violent crime came as a shock for the normally quiet neighborhood which has the lowest crime rate in the district. (Photo credit: ABC 5)

A Cleveland man didn’t hesitate to pull the trigger on his own gun this week when he saw his family in danger and being held at gunpoint by a group of men. A local report stated that Jacquella Lattimore had just left the house on Tuesday, her 8-year-old daughter’s birthday, with her two children and two nieces when she was approached by three armed men. But when Johnny Bridges, Lattimore’s fiancé, looked out the window of the house and saw the men, he armed himself and prepared to protect is family.

One of the men directed Lattimore back into her house, after closing the door of the detached garage where the other two gunmen were left behind with the children. “They walked her out of the garage and when they got to the door,” Bridges recalled. “I shot.”

The bullet hit one of the suspects, and sent all three running.

The suspect that was shot was taken to a local hospital where he was treated for the non-life threatening gunshot wound. The other two suspects were found a few blocks away, after the police stopped them, thinking that they looked suspicious.

Polensek said that they have a very nice neighborhood, that it’s very safe. In fact, it has the lowest crime rate in the fifth district and he intends to help keep it that way.

“We got a good neighborhood. We’re disgusted by these thugs, by this vermin that comes into our community, that perpetrates crime, and they get what they deserve,” Polensek told reporters. And in response to the suspect getting shot, he showed no empathy. “Too bad. You know, that’s what happens when you invade someone’s home. You deserve to get lead poisoning,” he said.

When Bridges asked if he would take the same actions again, the man tearfully replied, “In a heartbeat for my kids… anybody in my family… without even thinking, without hesitation.”