EDITORIAL: How much concealed carry training is enough? 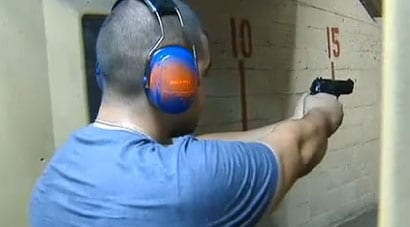 “Why don’t you ask the family of Trayvon Martin? Seriously. We’re setting ourselves up for problems,” Chicago Police Superintendent Garry McCarthy said of the insufficient 16 hours of training. (Photo credit: Fox 32, Chicago)

Gun laws vary drastically from state to state and it is a gun owner’s own responsibility to know their state’s legislation. In the case of firearms, probably more so than anything else, ignorance is never an acceptable excuse for breaking the law. And regardless of personal feelings about the regulations, as a law abiding citizen you are required to – well, abide by those laws.

While some states have very loose laws, others have banned the carrying of firearms in public altogether. Up until recently, that is anyway. In a much awaited and anticipated move, Illinois legislators have finally passed a concealed carry law, which up until that point the state denied the right to carry firearms in any manner outside of your own home or business. Now the District of Columbia remains the only “state” in the country which still denies the right. However, Illinois residents have only won half the battle.

Illinois state police have been given 60 days to come up with guidelines for concealed carry classes, which currently consist of 16 hours. But not everyone agrees that the time is sufficient. Illinois State Senator Dan Kotowski, who openly opposes concealed carry, wants to amend legislation to require 80 hours of firearms training to obtain a permit.

Chicago Police Superintendent Garry McCarthy agrees that 16 hours is not enough. “That is not an adequate period of time to become proficient with a firearm. You probably can’t even figure out how a gun works in that short a time, how to clean it! Let alone to learn how to use it,” McCarthy stated.

So how much training is enough to obtain a concealed carry permit? Opinions – and state regulations – are split.

“That’s the meat and potatoes of what a carry permit is about: when you legally can use deadly force in defense of yourself or somebody else,” the NRA’s Todd Vandermyde explained. (Photo credit: Fox 32, Chicago)

While some states, such as Arizona, allow residents to carry firearms without obtaining a permit or license of any kind, other states, such as Hawaii are so heavily restricted that it’s virtually impossible to obtain a permit anyway, even though it claims to be a “may issue” state. Most states which readily issue concealed carry permits, average about a day, 8 to 12 hours, worth of training, which mostly consists of learning the laws of the land and showing general knowledge and proficiency with a firearm.

But 80 hours – two full work weeks – worth of training seems a bit excessive. With McCarthy using the Zimmerman – Martin incident as a battle cry for extreme hours of training, one has to question his motives, whether they truly are for the safety of the people or simply more red tape to avoid issuing permits to the residents of Illinois. And it’s not like non-issuance of permits is keeping guns off the streets in places like Chicago, where it seems the average 14-year-old has a gun in his hands, without a permit of course.

Concealed carry instructor and Arkansas Carry Board of Directors member, Nicholas Stehle agrees that the two-week training is a bit much and has other, underlying intentions. And while he agrees that training is good, he also doesn’t think that it’s something which should be required.

“No other Constitutional rights require ‘hours of training’ before you’re allowed to exercise your rights,” he said. “For instance, no one requires ‘issue awareness training’ before being allowed to vote,” he explained. “I think the purpose of requiring 80 hours of training isn’t to ensure proficiency with a firearm – it is to discourage people from carrying legally. Chicago isn’t a friendly place to gun owners, and the city continues to attempt to go beyond what even most anti-gun people consider to be reasonable when it comes to regulating the behavior of law-abiding gun owners,” he said.

“The training of a Chicago Police officer is so intense, and still, in spite of all the training law enforcement goes through, we still have problems,” argues Senator Dan Kotowski, who wishes to see concealed carry permit holders have the same training as police. (Photo credit: Fox 32, Chicago)

McCarthy claims that the excessive time is needed to become proficient with a firearm, but not everyone even agrees that this responsibility is one that falls on the state. As a U.S. citizen who chooses to exercise their Second Amendment rights, shouldn’t part of that obligation be to take it upon oneself to ensure that they are proficient, as well as comfortable, confident and safe with the handling of a firearm? Why should that individual responsibility be regulated by the government?  And where is the history of criminals with a concealed carry permit to point to?

Additionally, any amount of training serves to be null if the training ends after the permit is obtained, once again shifting the responsibility back to the gun owner, not the state.

What’s your opinion? Is 80 hours of training an excessive amount to obtain a concealed carry permit? Whose responsibility is it to see that a permit holder is adequately trained: the permit holder or their state?