In an attempt to restore some logic and sense to the ongoing debate over the acquittal of George Zimmerman in the shooting death of 17-year-old Trayvon Martin, I’m going to respond to a USA Today Editorial Board perspective that pretty much sums up the consensus the mainstream media has about the case, i.e. guns, gun culture and common sense self-defense laws are to blame for the death of the Florida teen.

Below you’ll find the entire USA Today editorial piece italicized and in block quotes, but with my thoughts and comments interspersed.

Just about every aspect of why and how George Zimmerman came to fatally shoot an unarmed teenager on Feb. 26, 2012, is open for debate.

But one conclusion ought to be obvious: If Zimmerman had not been carrying a gun that night, Trayvon Martin would be alive today.

An unarmed Zimmerman probably would have heeded police advice to stay in his truck after seeing someone he believed was “up to no good.” And even if the neighborhood watch volunteer had left the vehicle, his altercation with Martin is unlikely to have turned deadly if a firearm had not been involved.

Alright, let’s stop right there.  Many journalists and gun control proponents continue to argue this point.

However, what the fail to consider is the other real possibility.  That is, if Zimmerman not had a gun, would he still be alive today? 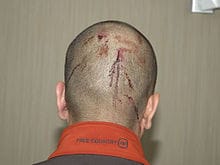 Think about it.  It appears, based on the facts of the case (the photo evidence of Zimmerman’s cuts and bruises), that Zimmerman was getting his butt kicked by Martin. More specifically, that Trayvon was on top of Zimmerman, slamming his head onto the pavement, which has the potential to become deadly because of the disparity of force.

In that situation, a punch to the face is not like a punch to the face as if one were standing, it’s the weight of the man’s body, plus the force generated by his fist striking the head into the ground.  There’s no way for the man on the bottom to slip or dodge or roll with the bunch (Watch the video below, it’s Massad Ayoob on Florida’s SYG law.  He breaks down disparity of force in great detail starting around the 9 minute mark).

Again, assuming Martin was on top of Zimmerman, If Zimmerman had not had a gun, would he have walked away from the fight?  Is it possible he would have sustained brain damage?  Might he have been killed?

It’s certainly possible.  Though, the larger point is, who knows what would have happened had Zimmerman not have been armed.  Any argument one way or the other is purely speculation.

Viewed from that perspective, the Zimmerman case is a byproduct of a society that in the past three decades has made it easier for people to buy guns, to carry concealed guns, to take guns into more places, and to bear less responsibility to retreat from dangerous situations.

In 1981, 19 states prohibited people from carrying a hidden weapon in public. And 28 states granted law enforcement the discretion to issue permits based on guidelines set by each state.

But a powerful gun lobby has turned that system upside down. Today in most states it’s relatively easy to get a concealed carry permit. In 2011, Wyoming became the fourth state — joining Alaska, Arizona and Vermont — to allow concealed firearms, no permit needed.

In 35 states, authorities must issue permits to just about any adult who seeks one, with limited exceptions such as a felony. In some states, if local police know that an applicant has made trouble in his neighborhood, has a drinking problem or has been arrested for a string of minor crimes, no matter. If the crime isn’t on a prohibited list, authorities must issue that permit.

All of what they say is pretty much true.  But here’s the whole pictured rendered in two charts:

As I’ve articulated in the past, correlation does not equal causation, but it’s difficult to deny the reality that as concealed carry rights have been expanded over the past two decades across the country, crime (property crime, violent crime, and the homicide rate) has continued to decline.

There’s no question that people have a constitutional right to bear arms, but the gun lobby has pushed its “guns everywhere” agenda to absurd extremes. As of two years ago, a dozen states allowed hidden guns in bars, places of worship, state parks and on college campuses.

Bars? Do we even need to debate that one? Nor do you need a Ph.D. to understand that letting college students pack heat on campus — where binge drinking, drug taking and immature judgment are common — is likely to cost more lives than the guns save.

Add to this volatile mix the rush by nearly half the states, led by Florida in 2005, to pass self-defense laws — described as “stand your ground” by supporters and “shoot first” by critics — and you’ve got another ingredient in the recipe for disaster.

Are SYG laws – self-defense laws that allow one to use deadly force in a public place without a duty to retreat if he/she reasonably believes his/her life is in danger – a recipe for disaster?

Nope, not if one is to accept research conducted by the University of Florida that found that although firearm-related homicides have slightly increased since the laws passage, the overall firearm-involved violent crime rate has dropped 33 percent between 2007 and 2011, all while the number of concealed carry permits rose by 90 percent.

Here were UF’s major conclusions from the SYG study:

Florida, or as it’s also known, the ‘Gunshine state,’ was the first state in the country to have 1 million active CCW permit holders, which turns out to be roughly 7 percent of the population eligible for concealed carry.

The bipartisan, 19-member panel that Florida Gov. Rick Scott assembled to review the state’s self-defense laws examined the UF study, along with other data, and heard testimony about the laws from experts and individuals who’ve been affected by it and eventually came to the following conclusion:

“The task force concurs with the core belief that all persons, regardless of citizenship status, have a right to feel safe and secure in our state. To that end, all persons have a fundamental right to stand their ground and defend themselves from attack with proportionate force in every place they have a lawful right to be and are conducting themselves in a lawful manner,” the panel’s draft recommendation stated when it was published last November.

Bottom line, the law has not had a statistically significant positive impact on crime, nor has it created a shoot-first culture; consequently, it should not be changed because the right to self-defense is a fundamental right.

Neighborhood Watch, which Zimmerman coordinated for his community, is one of the few places where, no matter the state, participants are warned against carrying a weapon. The program, created by the National Sheriffs’ Association, advises in its training manual that members “shall not carry weapons” and should never do more than observe and call police.

That’s wise advice, which, if heeded, would have averted a needless tragedy one rainy night in Sanford, Fla.

Again, we can’t be sure about what would have happened if Zimmerman wasn’t carrying a firearm.

What we can be sure of is that critics of self-defense laws, gun culture and concealed and/or open carry are typically uniformed about the complex relationship between guns and crime.   The truth is that law-abiding and responsible gun owners pose no great threat to public safety.  If anything, they are a reason why crime is uniformly declining.