Georgia Governor on Stand Your Ground Law: "I don't see any reason to change it" (VIDEO) 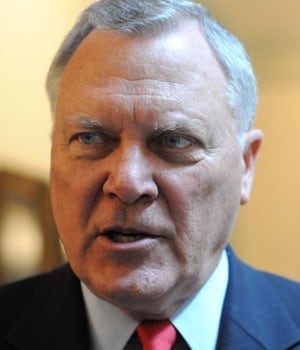 Georgia Gov. Nathan Deal responding to a constituent who made a ‘yo mama’ joke. Deal was not amused.

The acquittal of George Zimmerman in the shooting death of 17-year-old Trayvon Martin has put the spotlight once again on Florida’s controversial ‘Stand Your Ground’ law, which removes one’s duty to retreat while allowing one to use force, including deadly force, in public places if the individual reasonably fears for his/her life.

Predictably, the pro-gun control community is using the “not guilty” verdict as a rallying cry to repeal the self-defense law.  Leading the charge is New York City Mayor Michael Bloomberg, the co-founder of Mayors Against Illegal Guns, arguably the most aggressive pro-gun control organization in the country.

Earlier this week, Bloomberg blasted SYG laws, arguing that they create a ‘shoot-first’ mentality in the minds of many gun owners.

“Sadly, all the facts in this tragic case will probably never be known,” he said in a statement.

“But one fact has long been crystal clear: ‘shoot-first’ laws like those in Florida can inspire dangerous vigilantism and protect those who act recklessly with guns. Such laws – drafted by gun lobby extremists in Washington – encourage deadly confrontations by enabling people to shoot first and argue ‘justifiable homicide’ later.”

Bloomberg then went on to discuss how he is going to double down on his campaign to repeal SYG laws, which exist in about 30 states across the country.

“Last year, I joined a broad coalition of civic leaders to shine a light on the impact of ‘shoot-first’ laws and work to eliminate them, in Florida and wherever they have been passed. We will continue that work – and the tragic death of Trayvon Martin, an unarmed child attempting to walk home from the store, will continue to drive our efforts.”

So, given this renewed effort to nix common sense self-defense laws, gun owners and Second Amendment advocates need to be mindful of politicians and lawmakers who support one’s fundamental right to self-defense — which brings us to Georgia Gov. Nathan Deal, who on Tuesday voiced support for Georgia’s version of SYG in an interview with local news affiliate WSBTV.

“I’m fairly sure that there will be somebody in the General Assembly who will ask us to at least revisit and look at the Stand Your Ground legislation that was passed in 2006,” Deal said. “I don’t see anything out of the ordinary in terms of that statute. It is very similar to the statute in other states, including the state of Florida.”

Deal explained that although he doesn’t see a problem with the law, others in the General Assembly probably want to review it.

Gun owners need to know where their elected officials stand on SYG laws.  In the months to come, there’s little doubt that gun control groups are going to lobby hard to weaken self-defense laws.