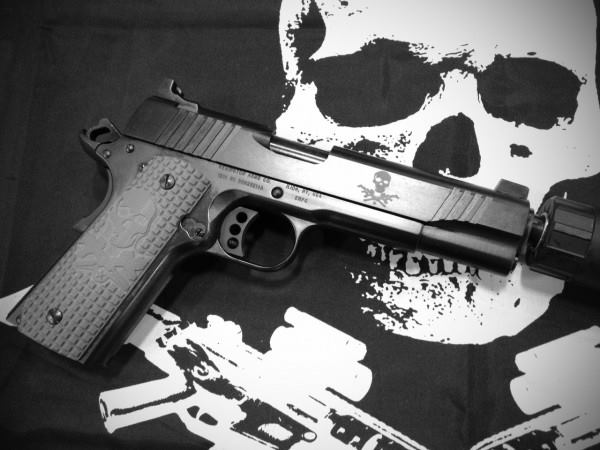 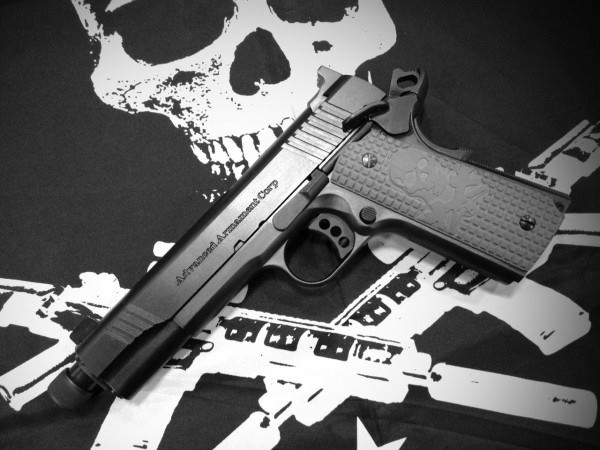 Advanced Armament Corp., renown manufacturer of top-flight silencers for rifles and handguns, has partnered together with parent company Remington to put together a limited run of AAC-edition suppressed Remington R1 packages.

Of course if these packages were just an ordinary Remington R1 1911 with a threaded barrel paired with an AAC silencer than they wouldn’t be altogether limited edition packages.

So this short run of Remington R1s was made with Advanced Armament Corp. engraved into the left side of the slide, the Skull Xguns logo on the right side and a set of custom Skull Xguns “Grenade” G10 grips by VZ Grips.

The AAC R1 also comes with special 2-dot suppressor sights, which ride higher to stick out above the silencer, which would block the sight picture with standard sights.

The package includes the custom R1, two 8-round magazines with rubber floorplates and one AAC Ti-Rant .45 for .45 ACP handguns, all in a custom Pelican carrying case.

The 1911 is a full-size model with an extended, threaded barrel. It tips the scales at 42 ounces dry and comes from the factory set with a four-pound trigger pull, give or take half a pound.

It is built on a precision-milled steel frame and slide. The slide has forward serrations for press-checking in addition to its large and deep rear slide serrations. The frontstrap of the pistol is grooved for an improved grip and the mainspring housing has 20 line-per-inch checkering.

It has an enhanced hammer, wide, skeletonized medium target trigger and enlarged beavertail safety with a checkered memory bump. The safety is wide and extended, and the slide stop is also checkered.

The gun is not ambidextrous and the controls are on the left side, along with the thumb cutout, although the grips are cut for an ambidextrous safety if you decide to install one.

Advanced Armament Corp. began shipping these packages earlier this week and they should be in the hands of distributors now. They’re being distributed exclusively through AcuSport so if you’re interested in getting one you must work with a dealer that can process Class III arms and carries AcuSport products. All NFA rules apply.

“500 of those kits, which include an AAC marked Remington R1 Enhanced Threaded pistol and a TiRant45 silencer, have shipped to the distributor and will be on the way to a dealer near you from there,” said AAC on their blog.

If you want one, you’ll have to move quickly.