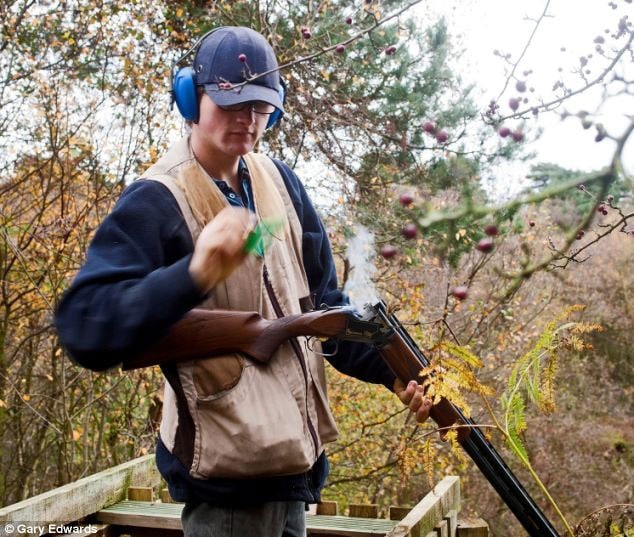 Bills Edwards was responsible for keeping vermin from destroying crops and livestock at his farm, but is unable to maintain that job without the use of a firearm. (Photo credit: Gary Edwards)

A tale from across the pond with some striking parallels in the land of the Second Amendment.  A 21-year-old farmer from Scarborough, England was arrested and accused of attempted murder for firing at a suspected thief who ran over the boy’s mother with a van. However, even though Bill Edwards, the young farmer, has been cleared of any crime, he has also lost the right to have a gun permit because he is “a danger to public safety or the peace.” This has essentially put him out of work since firearms are an important tool in his trade.

The original incident happened back in December when Edwards and his 50-year-old mother, Louisa Smith, found David Taylor on their property loading metal and other scrap into his van, the second theft on their property in less than 24 hours. Edwards explained in an interview, “We stood in front of the van so he could reverse out down a narrow lane. He drove forwards instead of backwards. He drove forward and knocked my mother to the ground. He then reversed back and drove forward again.”

After witnessing his mother being run over and fearing for both her safety and his own, Edwards, who is virtually always armed on the farm to control vermin, used his 12-gauge shotgun loaded with lightweight rabbit shot to shoot out the van’s passenger-side window and windshield.

Edwards even explained in the interview that he only had two choices: “I’m not really sure where else I could have aimed it. I could have shot him or the van. I chose to shoot at the van instead. The alternative was to get run over along with my mother.” He opted to show mercy on Taylor by shooting the van instead of him.

Apparently the legal system chose to show mercy on Taylor as well. He spent the night in jail, but was let off with a £100 fine – or about 150 US dollars. Taylor claims that he was “traumatized” by the ordeal and that he only fled, and led police on a high-speed chase, because Edwards shot at him.

Edwards and his mother also spent the night in jail, which Edwards even admitted was completely fine with him because he understood that they had to investigate the incident. Additionally, Edwards’ four shotguns and two rifles, all worth at least £3,000 – or nearly $5,000 – were all confiscated and his firearms permit was taken.

Edwards has since been cleared of the attempted murder charges, but still has his gun permit revoked. His firearms were returned to his father’s possession, but both Edward’s and his father now state that the guns have been ruined. “It looks like they have played hockey with them – and kept them in damp storage conditions,” Edwards explained. His father agrees. “All the guns are badly damaged,” he confirmed.

Additionally, he’s disappointed in the justice system. “I’m the victim in this and they’re treating me as the criminal. I spent nearly four months on bail and the thief has walked off with a £100 fine. If I hadn’t taken action, my mother would certainly be dead and quite possibly me as well,” Edwards explained.

In fact, in a statement by the Crown Prosecution Service, Edwards and his mother are referred to as “suspects” not victims. “People are entitled to use reasonable force and self-defense to defend themselves, their family, their property. The evidence appears to support the suspects’ version of events and that they feared for both of their safety,” the statement read.

Edwards father, Gary, has since started a website where he has detailed the incident and their ongoing legal battles in which they claim are “appalling treatment at the hands of the police,” misconduct and a complete whitewash.