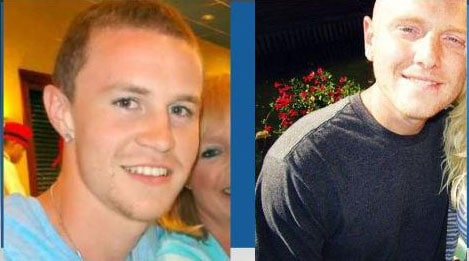 The boys’ mother says they were good-hearted, always helping others and enjoyed volunteering in the community. (Photo credit: First Coast News)

Two Florida boys were fatally shot over the weekend. As details of the incident started to emerge, so did speculations as to the motive of the shooting. Social media was abuzz with rumors that the shooting of the two white boys was a hate crime over their sporting of a “Free Zimmerman” bumper sticker on the truck they were in. The sheriff’s office has denied that allegation, stating that the crime had nothing to do with Trayvon Martin or the Zimmerman verdict. Scoffers don’t buy it, and accuse the sheriff’s department of covering up a hate crime.

The shooting occurred last Sunday night, the day following the announcement of Zimmerman’s not guilty verdict. The two brothers, 24-year-old Andrew Austin Bohannon and 19-year-old Matthew Ryan Bohannon, were sitting in a truck in the Golden Corral parking lot in Jacksonville, Florida, when another car with several people pulled up beside them. After “some type of conversation” between the two parties, someone from the second vehicle opened fire on the brothers.

One of the brothers was killed instantly and the other was transported to a nearby hospital and died a short time later.

However, the Jacksonville Sheriff’s Office released a statement assuring that the shooting was not related to the Zimmerman trial.

“We have had numerous inquiries, blog comments and Facebook postings about the relationship between the Normandy double homicide last night in the Golden Corral parking lot and the outcome of the George Zimmerman trial. We are confident to say where we are in the investigation that this is not the case at all. There is NO link at all between these cases, nor did we ever suspect one.” 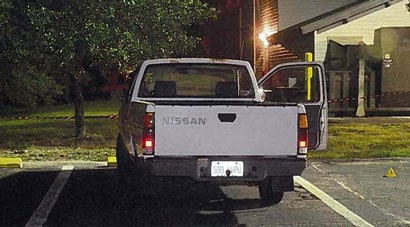 No “Free Zimmerman” sticker on that truck… unless of course the police removed it.

The rumors still continued though, and additional rumors cropped up accusing the Jacksonville Sheriff’s Office of covering up a hate crime. On top of that, there were never any photos released of the “Free Zimmerman” bumper sticker and the sheriff’s department continued to claim that no such sticker ever even existed. In fact, the sheriff’s office displayed a photo of the victims’ truck on their Facebook page, to help alleviate any false rumors. Additionally, there are photos on the page of large amounts of marijuana found at the victims’ home, which continue to solicit even more conspiracy-centered comments.

Authorities have since arrested four suspects in what they say was a drug deal gone bad. Eighteen-year-old Steven Murphy Bennett, 21-year-old George Carter, 19-year-old Avery Wood and 21-year-old Jallil Graves admitted that they worked together to rob the brothers of about 3 ounces of marijuana, which has a street value of about $600. A drug deal had been set up between the suspects and the boys and the robbery had been planned beforehand.

The four suspects said nothing about George Zimmerman or Trayvon Martin, but admitted that they were after some dope. (Photo credit: Jacksonville Sheriff’s Department)