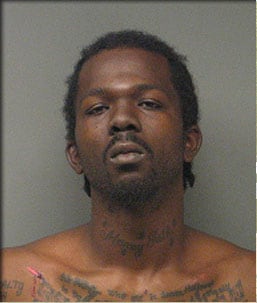 Mugshot of Tyaaron Harris, who usually wears a shirt.

An ongoing dispute between neighbors in the same apartment complex ended fatally for one man after he was shot multiple times on Monday in Webster Groves, Missouri. A man is in custody for the shooting death, but at least one witness claims it was a clear cut case of self-defense.

According to a local news report, the shooting happened around 2 o’clock yesterday afternoon.

One witness, Cierra White, said that she was on her back porch talking with Tyaaron Harris, the alleged suspect, when about 15 men approached him and started hitting, kicking and punching him. According to her account, as Harris fell to the ground he pulled a gun from his pocket and shot Laron Taylor.

White also explained that Harris and Taylor had been in some sort of an ongoing dispute for the past three or four days.

The crowd dispersed and when police arrived they found Taylor lying in a driveway with multiple gunshot wounds. He was transported to a local hospital where he remained in critical condition throughout the night. Taylor died earlier today during surgery.

Police took Harris into custody when they first arrived on the scene yesterday, held him overnight and charged him with second-degree murder and armed criminal action today following Taylor’s death. But according to at least one witness, Harris was defending himself and only shot after the group of men started beating on him.

“They beat him, they began punching him and stomping him all kind of things,” White said. “He was beginning to fall to the ground and as he was falling he reached into his pocket and pulled out a weapon and he actually shot and happened to hit one of the guys in the chest.”

Police have failed to comment on the allegation that the shooting was in self-defense.