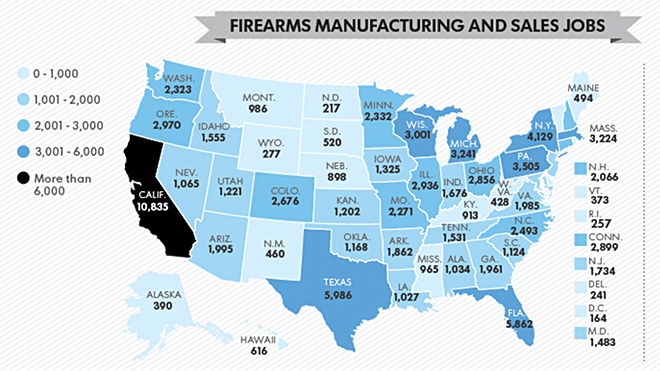 Anti-gun public advocacy groups like Moms Demand Action have been pressuring investment firms to sell off their interest in publicly-traded gun manufacturing companies. They have been somewhat successful, with several firms divesting themselves of gun holdings.

“There are many ways to address the epidemic of gun violence in America, including changing federal and state laws, and pressuring American businesses to put in place policies that protect their customers,” said Shannon Watts, MDA founder.

“Moms and women oversee nearly 80 percent of household spending; Moms Demand Action is going to make sure they spend and invest those dollars at businesses and institutions that respect and support the safety of our children and families.”

Along with pressure from New York public advocate Bill de Blasio now 14 Wall Street firms have dropped all of their firearms-related shares valued at about $150 million.

De Blasio’s office maintains a government website called “Wall Street for Change,” which lists hedge funds and money managers who are decreasing or increasing their holdings with gun manufacturers.

“We weren’t going to let business-as-usual stand after Newtown,” said de Blasio. “We put investors who were quietly propping up the gun lobby on notice, and we’ve proven that public pressure can be a game-changer.”

“This is by no means over. The NRA used its money and political influence to distort the debate in Washington. We need to break its stranglehold on the legislative process by continuing to bring pressure on its biggest financial backers.”

Most publicly-traded gun companies are showing record earnings, as the market is completely unable to keep up with public demand. Even months after the initial gun-buying frenzy that drained retail channels completely dry of all products, gun companies are struggling to get order out their doors fast enough.

It may not be too hard to convince traders to sell their stocks currently, as many gun shares are at record highs, although even assuming this gun boom is a bubble, it’s nowhere near bursting just yet. Firearm and firearm accessories are more popular than ever and gun culture is rapidly expanding. While sales will not stay this strong forever, many manufacturers are adding new capacity, gearing up for a renewed long-term interest in guns and shooting.

While $150 million is no small amount of money, it is a small percentage of the earnings of the U.S. small arms industry. Putting things into perspective, the total industry’s revenue in 2011 was $3.6 billion and $3.7 billion in 2012. The total revenue generated, including jobs and supporting business is estimated to be at least $12 billion. It’s anybody’s guess as to what the industry will post for this year, but it’s certain to be quite a bit more.

With companies around the globe posting major profits from the surging American market, MDA and de Blasio may be doing many investors a real favor by freeing up some of those sweet, sweet gun stocks.

The New York State Rifle and Pistol Association may have said it best.

How to lose money in the stock market – https://t.co/fYlYatzG2J @BilldeBlasio