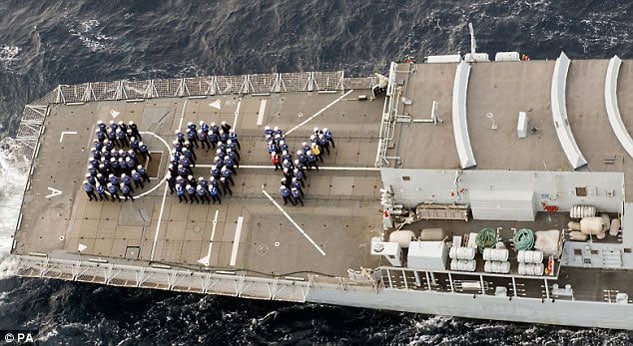 And they do weird stuff like spell out “Boy” with men on a battleship.

Gun salutes and tolling bells rang out across England today to celebrate the royal birth of the Duke and Duchess’ of Cambridge firstborn son, whose name has not yet been announced. The last salute of this kind was carried out 23 years ago after the birth of Princess Eugenie.

“The opportunity to mark the birth of the child of the Duke and Duchess of Cambridge by firing a 41-gun royal salute, comes as a huge honour for the King’s Troop Royal Horse Artillery,” stated Major Mark Edward.

The 10 bells of Westminster Abbey rang this afternoon, which coincided with the gun salute at Green Park.

The Honourable Artillery Company also delivered a 62-gun salute from the Tower of London.

Those stationed aboard the HMS Lancaster also honored the royal birth by standing in formation to spell out the word “Boy” on the deck of the ship.