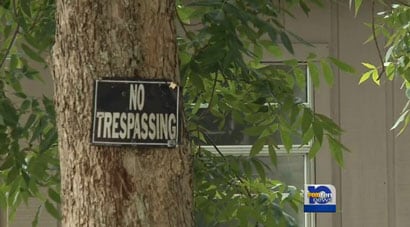 The homeowner has a “No Trespassing” sign outside, which apparently worked about as well as “No Firearms Allowed” signs. (Photo credit: Fox 10, Mobile)

An attempted burglary in Alabama last week was foiled by the homeowner and his shotgun, landing one suspect in the hospital and his wanted getaway driver in jail on an unrelated attempted murder charge. But neighbors and witnesses say that there was more to the incident than just a simple break in, and that it stemmed from a previous altercation between the two men.

The attempted burglary happened in Theodore, about 15 miles south of Mobile, at around 6:00 a.m. last Wednesday. Jackie Ruffin apparently broke into the home and attempted to steal a television, but at some point was confronted by the homeowner. The two got into a fight, and then the homeowner shot Ruffin.

One neighbor, who wishes to remain anonymous, said, “I heard the shot; I came out of the house. Just a loud shot — like, a 12-gauge or something.” The same neighbor also told reporters, “All I know is the dude, him and my homeboy had got in to it, like a couple months back, and he stabbed my homeboy. And I guess it was a retaliation thing. He tried break in my homeboy’s house and steal his flat screen.”

Him and another neighbor, who also wanted to remain anonymous, explained that Ruffin stabbed the homeowner during a previous altercation at a high school reunion. “He asked him why he done it and he said, ‘I’ll stab you, too’” the second neighbor said.

After being shot, Ruffin fled from the area, but showed up at a local hospital a few minutes later. Officers arrested him and charged him with burglary. But in an interesting turn of events, officers also realized that Ruffin’s driver, Randall Jones, was wanted for attempted murder from an incident two months ago. Jones allegedly shot a man in the head, leaving him in a coma. 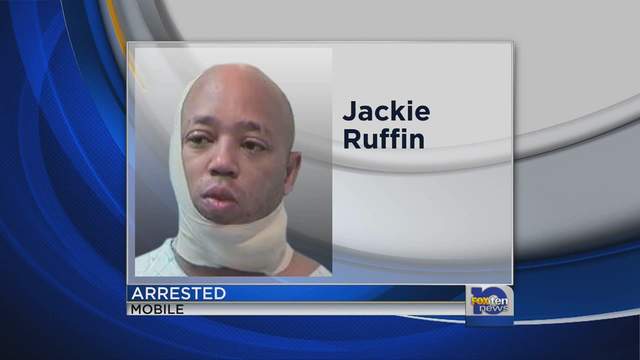 Jackie Ruffin was lucky that the homeowner apparently had his 12-gauge loaded with birdshot. (Photo credit: Fox 10, Mobile)

The shooting incident also brought about an important discussion on a gun forum. Users discussed, given Ruffin’s condition after being shot with a 12-gauge, the probability of the homeowner using some sort of birdshot instead of a slug. Obviously, the injuries he sustained from 12-gauge birdshot are significant less than they would have been with a 12-gauge slug.

Now, not to say that birdshot can’t be used to stop a couple of would-be robbers, but it’s certainly a much-debated topic whether or not it’s an effective choice for home defense.