Crossing the Lexicon With Police Chief Mark Kessler: "F*ck All You Libtards," (Video) 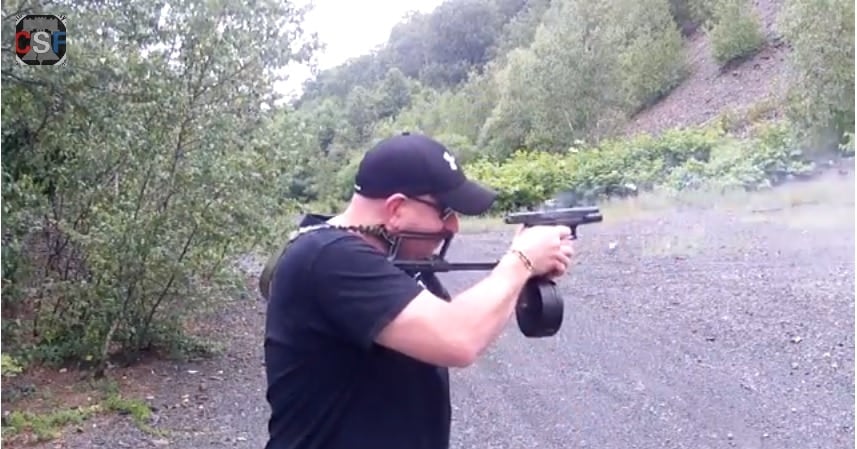 Meet Police Chief Mark Kessler of Gilberton, Pennsylvania. This small town cop has some big things to say, even if most of it is only conveyed in four letter words. A 14-year veteran, Kessler made his initial fame with a Youtube video where he states “Fuck all you libtards out there. Read my shirt.” I will save what his shirt says for the video below.

When viewing the video alone it may be difficult to understand where Kessler’s agitation is coming from because despite his a lot of fury he doesn’t provide much context, but Guns.com has a hunch, that like many, it’s leaders in Washington D.C. that have him calling folks “c*cksuckers” and doing angry mag dumps.  And why shouldn’t he be angry?  It’s clear from his channel that Kessler sees himself a defender of the constitution and has even founded his own militia, known as the Constitutional Security Force. Other videos posted by Kessler are in protest of certain acts, like the U.S. agreement to sign a U.N. Arms Treaty, or at certain people like House Minority Leader Rep. Nancy Pelosi when he shoots a target that looks like a clown.

Of course being a public figure means that sometimes you have to bend to political pressures and make some embarrassing public apologies. But this is Kessler. His apologies are from the heart and his words of regret are a building crescendo into small arms fire.

After these videos many would think that Kessler has just posted his spiral into political Seppuku. But again you would be surprised. The mayor of Gilberton, Mayor Mary Lou Hannon says that Kessler’s has the right to express himself, and the city will not “take action to quash free speech, whether or not each member of council or any member of council agrees with it.”

There are however many that do not agree with Kessler and the proof is how many dislikes his videos have received on Youtube. The comments have been disabled…

Guns.com is luke warm about all this.  With the offensive language he uses we’d never call him an ambassador for Second Amendment rights and only bad things can come when grown men let their emotions rule them like this. But if we were going out for an afternoon full of shooting, Kessler does seem like a pretty entertaining guy to go with.  Kind of like this guy.