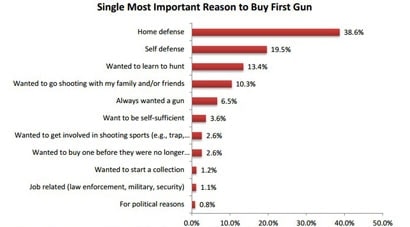 It’s no secret that Americans own lots of guns. In fact, gun ownership in the country has risen, even before the latest gun control debate sparked an even greater increase in gun sales to which the market is still recovering from in some areas.

The National Shooting Sports Foundation recently conducted a study to see just who the new gun buyers were — demographically, not personally — what types of guns they were buying, where they were purchasing them from, how much they were spending and what their experience levels were, among other details.

The study found some interesting conclusions, one being that the overwhelming majority of first-time gun buyers purchase firearms for either home defense (87.3 percent) or personal defense (76.5 percent) and that most first-time buyers purchase semi-automatic handguns (34 percent) for this purpose. Joe Biden’s advice to buy a shotgun, landed in second with nearly 28 percent opting for that choice for home defense.

In addition, the study indicated that women are particularly concerned about self-defense and that is a highly motivating factor for choosing and making their purchases. This comes as no surprise since firearms are often regarded as “the equalizer” between women, who are generally smaller in build and possess much less strength than their assailants, who are often larger males with greater strength.

Although, as with anything else, there is certainly some inaccurate information floating around about gun ownership, and of course the few select irresponsible gun owners that break headlines and make the rest of us look extremely bad. A quick look at the nightly news indicates that there is an epidemic of gun violence in the country, but the fact is that violent crime is actually down and there’s reasonable speculation that it’s due, at least in part, to an increase in gun ownership.

On the flip side, there continues to be no credible evidence that an increase in gun ownership by law abiding citizens results in an escalation of gun-related crime. In fact, the CDC even found that defensive gun use far outweighs gun use to perpetrate crime. 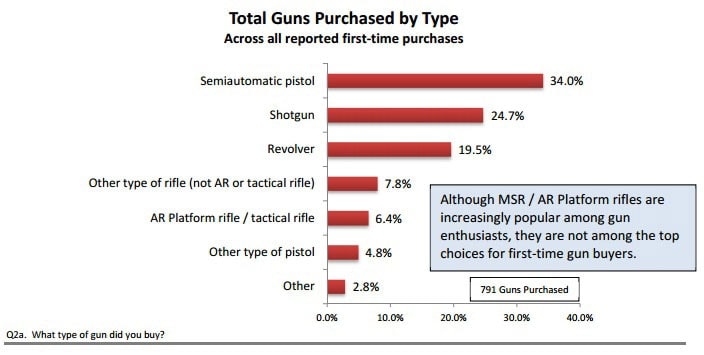 The most popular choice for first-time buyers is a semi-auto handgun. (Photo credit: NSSF)

Criminals are increasingly being confronted with the receiving end of a gun barrel when they attempt to rob, rape, murder, kidnap, or cause other harm.

Of course, sometimes other, non-lethal defense weapons, such as stun guns, are an effective means of personal protection, but sometimes they’re not. Ultimately it comes down to personal choice, and according to the NSSF’s study, the choice for firearms for home and self-defense is increasing, especially among women who are standing up and refusing to become victims.