Responding to fears over the possibility of 3D printed weapons, Create it REAL, a Danish 3D printer parts and software company, is claiming that they can make a software that will act as a filter when installed on 3D printers, prohibiting these machines from making parts of weapons.

The filter would recognize the design of a gun part and through its own algorithm, be able to decide if the item being printed in the 3D printer was a trigger for a pistol or a replacement part to someones paintball gun.  If certain features align, the software will not allow the user to view and print the model.

The idea of a 3D printed gun may or may not have started with Cody Wilson, the founder of Defense Distributed, but he is arguably the loudest voice for its viability. Over a number of months Defense Distributed made a series of Youtube videos documenting their gradual progression in making more and more complex pieces of an AR-15. First it was a magazine, then a lower receiver that did not break under the stresses of firing. Then the world’s first ever all 3D printed gun, The Liberator. The only item in the gun that was metal, was a roofing nail used as the firing pin that was required by The Undetectable Firearms Act. 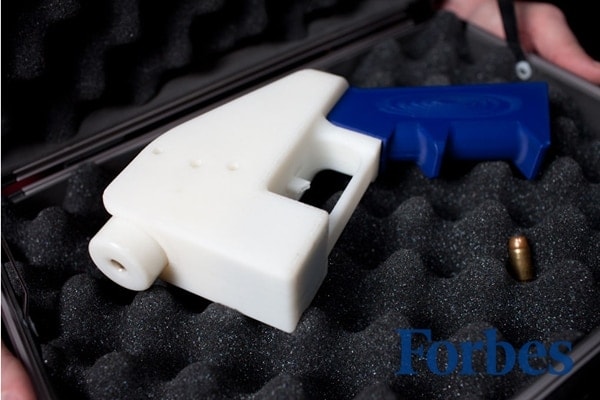 If those in the Anti-Gun sphere weren’t already horrified by this prospect, they were not prepared for the fact that Wilson’s company was posting all of the files to print off your own firearm parts, for free, on his website DEFCAD.org. Quickly, Wilson was pegged as one of the most dangerous people on the planet.

This situation left politicians in the U.S. scrambling to find a way to control 3D gun printing before it had a chance to bloom. The State Department told Wilson to knock it off and tried to pull all 3D gun files from the Internet, which proved impossible. The state of New York tried to pass a law making it a felony to own or operate a firearm with 3D printed parts, unless that person was a licensed gunsmith and registered the guns with police in a 72 hour period (which raises the a curious point that the government seems at least accepting of the new technology, just as long as you can’t do it yourself).

But, none of this is what motivated Create it REAL to make this software.  That seems to be fueled by more economic reasons.  From their press release, “There have been debates in the media on how to stop people from printing guns on their 3D printers. Banning the technology would mean a huge regression towards what The Economist called the ‘third industrial revolution.'”

And we here at Guns.com find that pretty of ironic. Every day, hobbyists with personal 3D printers tinker with designs that make the possibility of a completely functional and homemade AR-15 or AK-47 a reality.  While inspiring to lovers of Amendment Number Two, the concept freaks out those with inclination towards gun control, and as such, 3D technologies have come under governmental scrutiny — which doesn’t bode well for budding technology development firms looking to sell a bunch of expensive 3D printers to said hobbyists. Why are we reminded of a snake swallowing its own tail?

As to the feasibility of this software, their method is said to be similar to that of photo editing programs, like Photoshop, that have the built-in capacity to recognize things like currency to stop users from forging money, but this also creates some obvious skepticism to anyone with software knowledge. All filters can be fooled, broken or circumvented. The only thing required is a person with the time and skill set to make a software patch and millions of dollars of software loses its value in an instant. The Pirate Bay Internet torrent site is a shining example of where this happens everyday.