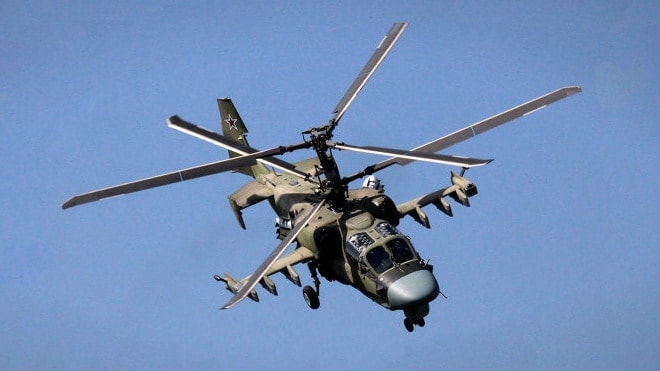 Russia’s Izhmash arms factory in Izhevsk is getting a healthy cash infusion from their own military, whose combined forces are ordering roughly $400 million’s worth (RUB 13 billion) of AT-16 Vikhr missiles for their Ka-50 and Ka-52 helicopters and Su-25 airplanes. The missiles are also used on their AK-630 Vikhr-K ships.

These long-range, supersonic laser-riding missile systems must be delivered by 2015.

Designed to take out ground targets and slow-moving aircraft (such as other helicopters) the Vikhr missiles are flexible weapons that contain two High-Explosive Anti-Tank (HEAT) warheads in order to be more effective against reactive armor.

Vikhr missiles are “beam-riding” missiles as opposed to laser-guided. They have a sensors that face rearwards to their launch vehicle. The vehicle points a laser at its target and the missile stays in front of the laser, “riding” the beam to the target.

There are disadvantages to beam-riding systems. Unlike laser-guided systems they can’t be handed off from one laser beam to another. They’re also harder to guide as they get farther away from their launch vehicle.

But they are much harder to confuse as their guidance system points backwards, and they can work with lower-power guide lasers, making them less visible to missile detection systems.

Bottom line, they’re also less expensive, which is one advantage no military can overlook.

“Because it is a high-tech product … Izhmash is planning to broadly collaborate with other companies, especially with those that will be part of the future Kalashnikov Corporation,” said company spokeswoman Yelena Filatova at a press conference.

Izhmash is merging with Izhmekh, the other primary small arms in Izhevsk under the iconic brand name Kalashnikov.

This will be one of the single “largest state orders in recent years” the company has received, with almost 30 percent of their sales coming from the American commercial market.

The Russian small arms industry has been struggling for several years as it’s getting harder and harder to find people in need of new Kalashnikov rifles. The merger of these two companies is part of a restructuring that’s expected to make both more efficient and under the new Kalashnikov brand, more profitable.