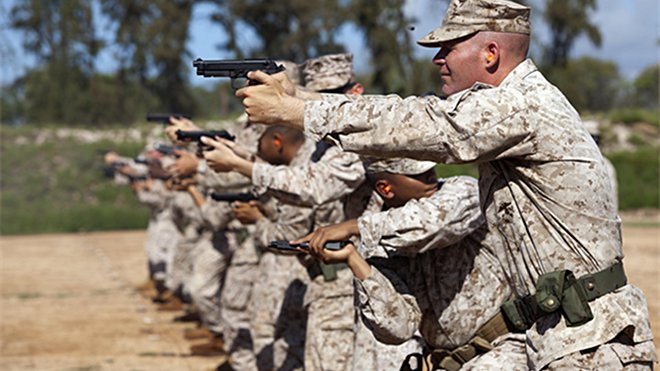 The U.S. Marine Corps are phasing in a new pistol qualification program that requires shooting fast and hitting multiple targets, dropping their ’80s-era qualifications that was focused on precision slow shooting.

The idea is that the new qualification will better prepare Marines for shooting in combat situations should they need to fall back on their sidearm. While the new program won’t be standard until next year, many units are adopting it ahead of schedule.

“In the past, Marines came back from deployment and said when they had to use the pistol, they didn’t feel proficient with it,” said Marine Gunner and Chief Warrant Officer Jordan Kramp. “The best way to understand what it will feel like in combat is to experience combat. The [new program] will give Marines the closest understanding of how to use the pistol in combat, without actually being in combat.”

“Looking at the last group that came through, and this group, these sites want to get onto the program. They’re chomping at the bit,” said Wade. “There are a couple of gunners out there who are saying, ‘I want to get going on this.’ I know at Hawaii, they were ordering targets, they were getting their range infrastructure figured out, and they were training their Marines. As soon as they’re ready, they want to go.”

“This course is more combat-oriented than the pistol qualification previously implemented,” said Cpl. Kyle Abreu-Buendia. “Everything is more rushed. In combat, you’re not always going to have a perfect grip. When the shooter draws the pistol from the holster, it relates to how a Marine will shoot in a stressed environment. Besides, it’s actually more fun to shoot this way.”

Called the Combat Pistol Program, the CPP replaces what many consider to be the outdated Entry Level Pistol Program. The CPP is already being used to train Marines at several bases including Camp Lejeune, North Carolina, Marine Corps Base Hawaii and The Basic School and Quantico, Virginia.

With the ELP, Marines are given 10 minutes to fire 15 shots at targets 25 yards away. In a complete reversal of training schemes, the new CPP has multiple timed stages at 7, 15 and 25 yards with shooters having just 5 to 12 seconds per stage.

The new quals are scored slightly differently but will be normalized to the ELP badge standards that the Marines are familiar with.

“We wanted to stay true to Expert, Sharpshooter, Marksman, Unqualified,” said Chief Warrant Officer Christian Wade to the Military Times. “That was our guiding force right there. We didn’t want to turn that on its end, and make it unfair or anything like that. We wanted to stay relatively true to the pistol badge construct that we had before.”

The normalized scoring system will be discarded when the CPP becomes standard in November 2014.

Marine units have been allowed to begin using the new program since March, giving Marines ample time to acquire targets, train coaches and develop training regimens for the CPP.

The CPP has been in development for about five years and covers a broad range of pistol skills not limited to putting holes in paper. The program also teaches Marines skills that were not formally part of the previous program including weapon function checks.

“I can do a chamber check, making sure my pistol has a round chambered and has no malfunction or stoppage,” said Sgt. Daniel Limauge. “The search and assess and checking the condition of your pistol is an important part of CPP because it gets away from the strict marksmanship of just understanding how to fire a pistol accurately. It gets you to start understanding how to fight with a pistol.”

“We did some reloads [during the ELP], but it wasn’t really anything tactical,” 2nd Lt. William Keller. “Now we’re drawing from a holster, or employing techniques to actually conduct threat assessment. When Marines are going downrange, they can understand ‘If two to the chest doesn’t work, go for that fail-safe’ shot to the head.”

The Corps will use the new program’s breaking-in period to see if any of the new qual’s elements should be carried over to their rifle training programs.

Every Marine is a practical shooter?