Since 2005, gun sales have exploded according to FBI background checks. The boom in sales ignited following the violence and chaos — not the water — that flooded New Orleans in the aftermath of Hurricane Katrina. Barbarism and bedlam flowed through the Big Easy stunning and horrifying law-abiding citizens around the country. Most Americans were blessed not to be victims of the mayhem. Instead, most witnessed evil unfold from behind the safety of a television or computer screen.

Nevertheless, many Americans who had never owned a firearm prior to Katrina apparently decided to arm themselves after Katrina. Exploding gun sales nationwide support this assertion. Katrina exposed the reality and perils of depending on the government. Murderers, rapists, violent sociopaths and maniacal looters took over New Orleans — and the government could do little to stop them.

Despite the obvious lessons learned since Katrina, a frightening percentage of the country still suffers from an irrational paranoia of law-abiding citizens owning firearms to protect themselves and their families. Perhaps these apologists, hooligans, outlaws, lawyers and elitists (or more accurately the A-HOLEs) — like those who work for the ACLU and who occupy much of Congress and the White House — simply recognize their own mental instabilities and fear that a rational, law-abiding, and armed American might be forced to shoot an A-HOLE in self-defense when the A-HOLEs lash out violently following one of their bloodthirsty protests for world peace.

In fact just last week, one major A-HOLE — United States Attorney General Eric Holder — unleashed his seething contempt for every human being’s fundamental right to self-defense (except for a violent felon’s right, perhaps). Holder snidely remarked, “Separate and apart from the [Florida] case that has drawn the nation’s attention, it’s time to question laws that senselessly expand the concept of self-defense and sow dangerous conflict in our neighborhoods.” Concept?

Now to my thinking, only an A-HOLE could have the audacity to suggest self-defense is a concept.  And only a wicked A-HOLE is willing to conduct life-threatening-social experiments with innocent human beings by imposing a duty to retreat when law-abiding citizens become the victims of violent predators. Wolves prey more easily on defenseless fawns than they do on powerful, adult, American bison. Adult buffaloes have far greater ability than frail, diminutive fawns do to stand their ground.

It takes an intellectual or a moron not to see nature’s celestial design and connection to civilized society. When law-abiding and mentally stable citizens arm themselves, the work environment for predatory criminals and corrupt politicians becomes far more risky. Risk is a sobering deterrent to any endeavor. Ask any wolf or imprisoned politician (the redundancy is intentional).

The United States Attorney General — responsible for America’s entire justice system — clearly identifies more with villains and aggressors than he does with law-abiding, honest Americans. Why else would he consistently support policies that intentionally tilt the advantage to predatory criminals?

Holder is not the only assailant attacking stand-your-ground laws, however. His boss, the world’s most prominent A-HOLE, backed up his Attorney General serving as his accomplice to this despicable assault on individual liberty and state sovereignty. 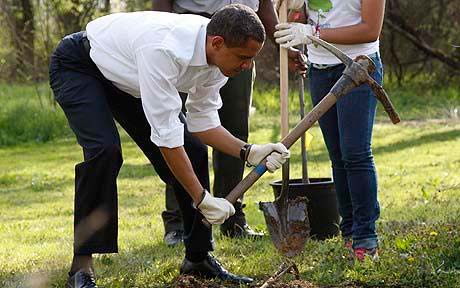 President Obama said: “I think it would be useful for us to examine some state and local laws to see if they are designed in such a way that they may encourage the kinds of altercations and confrontations and tragedies that we saw in the Florida case, rather than diffuse potential altercations.” Allowing innocent victims to meet force with force is far more useful than wasting time examining some A-HOLE’s childish vision of a world without dangerous altercations.

In light of the president’s sophomoric worldviews, mentally stable Americans understand fully the concept that ignited the subsequent booms in gun sales after both his elections. Not only does his disingenuous support of the Second Amendment give many Americans a reason to pause, but also the thought of depending on the government after having witnessed Katrina should provide a sufficient dose of reality for everyone.

Furthermore, the administration and its cohorts in congress have discriminated perversely against generally patriotic and Constitution revering citizens while at the same time encouraging and emboldening terrorists and criminals. The stated objective to “change” America seems more like a synonym for “destroy” as change has mostly decimated the nation’s founding values and principles.

Republicans, however, have their fair share of A-HOLEs, too. Take Sen. John McCain for example. Seizing on the delirium other A-HOLEs are suffering, McCain leapt on the opportunity to attack Arizona’s stand-your-ground law. McCain suggested state legislators would readdress what he called the state’s “controversial law.” The only thing controversial about Arizona is how its otherwise mentally stable residents have reelected John McCain

Clearly, A-HOLEs are feverishly picking away at liberty and self-reliance. The Second Amendment and those willing to defend it stand in their way.