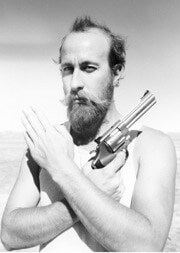 Maybe you do, maybe you don’t, but Guns.com had a chance to interview him last July about his controversial book God, Guns & Guts: The Greatest Book Ever Made About Contemporary American Gun Culture.

Why was Ben’s book controversial?

Well, because it contained photos that depicted, for lack of a better term, ‘eccentric-looking’ gun owners handling firearms in what appeared to be an unsafe and careless manner, i.e., finger on the trigger.  This led many in the gun community to believe that the book was a joke being played on gun owners, a sort of backhanded hit piece, fodder for the pro-gun control crowd.

As I noted in a previous Guns.com article, after obtaining a copy of the book, and perusing its pages, I didn’t get the feeling that Ben’s book was intentionally designed to make gun owners look bad.  In fact, I actually enjoyed the book and identified with its aesthetic vision.  Overall, I thought it was a compelling and entertaining snapshot of American gun owners, even though it skewed to the more ‘lively’ members of the gun community.

Long story short, the book was a hit.  And now Philippi’s parlayed the book into a reality show on the History Channel.  The show’s called “God, Guns & Automobiles,” and Philippi wanted to tell you a little bit about the show:

In April 2012, I self-published a photographic art book called God, Guns & Guts. It celebrates contemporary American gun culture in a bold and unapologetic way. It took me four years photographing proud, legal and unashamed American gun owners from all walks of life and every corner of America.

My book has now gone on to inspire the reality TV show called God, Guns & Automobiles on History Channel. I helped create and produce the show that premiered on July 8th 2013 to 1.9 million people. It stars Mark Muller, his brother Erich ‘Mancow’ Muller, his family and a band of charismatic salesmen at his car dealership in Butler, Missouri called Max Motors.

I first saw Mark Muller on CNN in August 2009. He was being interviewed about a unique sale he was having at Max Motors. If you bought a truck from him, he’d give you a free AK47. I thought it was genius and I tracked down his phone number and called him up. I explained that I was making a book about American gun culture and that I had to meet him.

At first he said no. He thought I was some left-wing journalist wanting to do a hit piece on him. I insisted that I wasn’t and persisted. Finally he said yes and I jumped in my car and drove the 1500 miles to meet him. We ended having a great time drinking too much whiskey, shooting high-powered weapons and talking about God and the battle between good and evil.

Meeting Mark was one of the most memorable experiences from making my book. When it came time time to choose a cover, I called him up and asked him if he wanted to be on the cover. He told me that not only did he want to be on the cover, but he wanted to write the introduction as well. I thought, who else to represent my book than a true patriot that isn’t afraid to say things straight.

The rest is history – literally. God, Guns & Automobiles airs Monday nights on History Channel at 9C/10P. It is a fun upbeat show that embodies the values and spirit of the heartland of America and celebrates The 2nd Amendment.

Please check out his show and let us know what you think.