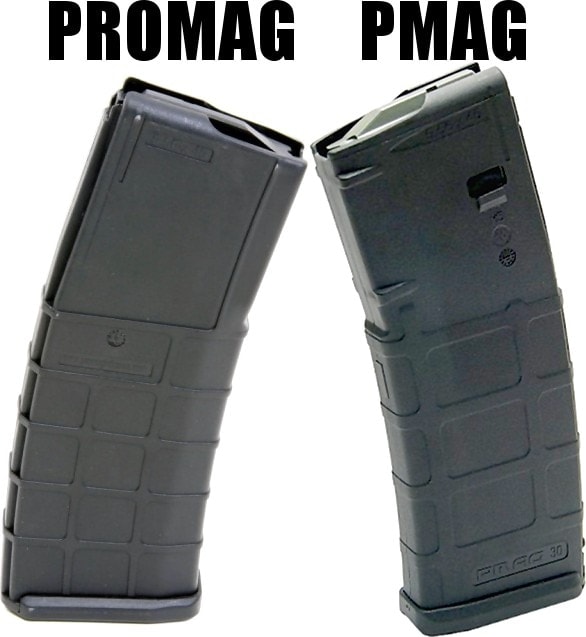 While the resemblance is clear with the Promag AR-15 magazines, the other companies’ products don’t immediately smack of Magpul influence. But there’s more to the PMAG than a waffle patterned body, and the lawsuit could be calling out anything from internal anti-tilt rails, follower geometry or spring shape.

Magpul has multiple patents that go into every magazine they make, and their innovation is apparent: no company since Colt has designed a more popular AR-pattern .223 Remington/5.56 NATO magazine and none have the track record of performance.

Here is their complaint against Promag. The company issued this statement on their website.

“Magpul Industries Corp announced today that it has filed patent infringement lawsuits against four companies for offering for sale, selling, and distributing magazines for AR15/M16 compatible weapons in violation of Magpul’s patents.  The company’s lawsuits allege infringement of Utility Pat. No. 8,069,601 for a novel ammunition magazine, in addition to numerous Magpul design patents.

“The lawsuits, filed in United States District Court, Colorado, provide another example of Magpul’s dedication to protecting its valuable brand while sending a warning to others attempting to infringe on our innovations.

“‘These patents exemplify the industrial design-focused spirit at Magpul, which drives us to create novel solutions that enhance user experience with our products,’ said Duane Liptak, Director of Product Management and Marketing for Magpul Industries. ‘People who use Magpul products have high expectations and a great deal of trust regarding the value, quality, and amount of thought put into every design we release.  As such, we cannot allow others to misappropriate the patented technology that helps us generate that consumer confidence and trust.’

“The lawsuits are the largest and most significant to date brought by Magpul, and are part of the company’s ongoing proactive efforts to combat the unlawful production, distribution, and sale of products that infringe on its valuable intellectual property rights.”

This isn’t Magpul’s first courtroom experience. Magpul has lawyered up in the past to protect their interests as well as to fight allegations of patent infringement of their own. Previously Vltor and Robinson Arms sought damages from the company for stepping on their patent toes, and Magpul is currently involved in a massive lawsuit against the state of Colorado for passing an unpopular and questionably constitutional gun control package.

No matter the outcome of these new lawsuits we’re sure that Magpul will continue to be the leader in firearm accessories.