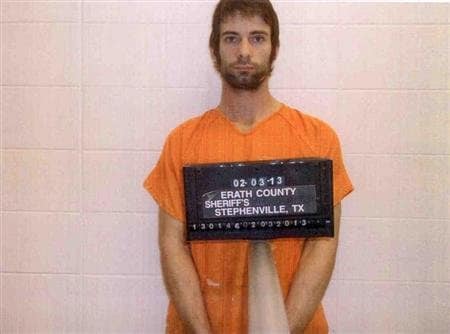 The Iraq war veteran accused of gunning down “American Sniper” author Chris Kyle and his friend was indicted by a grand jury last week in Erath County, Texas.

Eddie Ray Routh, 25, was indicted for capital murder for allegedly killing Kyle and Chad Littlefield at a gun range near Fort Worth in February. If convicted, Routh faces either life without parole or the death penalty, Reuters reported, as those are the only outcomes that go along with a “capital murder” charge.

The incident occurred around 3 o’clock on Feb. 2 when the two men brought Routh out to the shooting range at the Rough Creek Lodge, an upscale recreational area that offers a slew of outdoor activities. Kyle, who is said to have helped design the gun range, often volunteered his time by bringing veterans suffering with PTSD out to shoot, hunt or workout as a way to bond and relax.

Shortly after arriving to the range and getting a gun, Routh turned the pistol on Kyle and Littlefield and then drove Kyle’s truck to his sister’s home just outside of Dallas where he confessed to shooting the two men.

The Associated Press reported that Routh told his sister and brother-in-law that the men “were out shooting target practice and he couldn’t trust them so he killed them before they could kill him.”

His sister called the police and Routh was later arrested when officers caught up with him on a nearby highway. Routh was attempting to evade Texas authorities by escaping to Oklahoma.

Routh was an active duty Marine from 2006 to 2010, reached the rank of Corporal, and is currently part of the Individual Ready Reserve program, Reuters reported. He did a tour in Iraq in 2007 and in Haiti following the devastating earthquake there in 2010.

Routh’s brother-in-law later told authorities that Routh had recently been diagnosed with PTSD. Routh had also stayed at a mental hospital twice within the five months leading up to the shooting, the AP reported. Routh’s need for help was due to the fact that he had threatened the lives of family members and talked of suicide. Mental health is expected to be a key issue in his case, local media reported.

Kyle, famous for his book and known for being America’s deadliest sniper, was laid to rest Feb. 11. Nearly 7,000 people attended his funeral at the Dallas football stadium.

Kyle’s wife, Taya Kyle, said that she believes her husband was not given “all the information” on Routh’s condition before bringing him to the gun range.

Routh is being held in the Erath County Jail and bond is set at $3 million. He is said to be on suicide watch since his arrest. There is no date set for his trial.