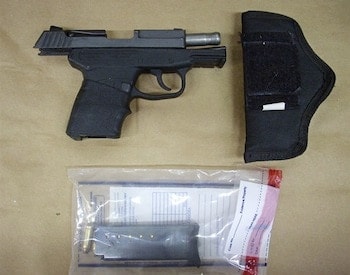 Technically, George Zimmerman can just go buy a new gun if he wants.

The Buckeye Firearms Association collected $12,150.37 in donations and delivered it to George Zimmerman on Friday in the form of a check. What started as a simple fundraiser to gather money for the purchase of a new gun for Zimmerman resulted in far more donations than the association ever anticipated, as well as a few bumps in the road from some who were none too happy about the fundraiser.

The association started the fund about two weeks ago when the Justice Department refused to let Zimmerman have his Kel-Tec PF9 back despite the Florida justice system clearing him in charges related to the shooting death of Trayvon Martin. The DOJ did not allow any of the evidence from the case to be returned, as the department is currently investigating the possibility of a civil lawsuit against Zimmerman.

The association views the action of the DOJ as “an unacceptable abuse of power” and added, “the threats of federal charges on civil rights grounds is little more than blatant pandering for political gain.” And according to the association, that’s why they decided to take action — that coupled with the apparent immediate need for protecting Zimmerman and his family.

When Zimmerman’s attorney, Mark O’Mara was asked during an interview with NBC News if Zimmerman intended to carry a gun since being acquitted, O’Mara replied, “Yes. Even more reason now, isn’t there?” as he cited death threats abound for both Zimmerman and his family.

In fact, the hate against Zimmerman is so vivid that a family that he helped after a car wreck just days after his trial’s end, refused to speak to the media out of fear that they will portray him as a hero and become targets themselves for violence.

The Buckeye Firearms Association, an Ohio-based gun rights advocacy group, said they had raised over $2,000 within the first few hours of establishing the fundraiser, but as word spread, more and more donations continued to accumulate, and more and more people – including those who did not agree with the association’s actions – took notice as well. The story began to spread throughout the media and trouble began for the somewhat small association.

Just days after setting up the fund, the group became the victim of hackers. “This isn’t the first time we’ve been the victim of an attack. In fact, it happens all the time. In most cases, though, these attacks are unsuccessful or so minor that they go largely unnoticed. The attack on Wednesday, however, not only took out our website, it effectively shut down our hosting company, disabling thousands of other sites,” the group said.

Although the hack temporarily took out the website, the fundraiser was still successful. The group said that they collected 774 separate donations from residents of 48 states as well as donations from Australia, Lithuania and Switzerland. At the start of the fundraiser, the association only anticipated raising $1,000 to $2,000.

The check for more than $12,000 was delivered by FedEx and according to O’Mara’s office, they received the check Friday afternoon.

The Buckeye Firearms Association legal chairman, Ken Hanson said, “The money is intended to be used for anything he needs to defend himself or his family. He has complete discretion on how to use the money.”

Zimmerman’s spokesman, Shawn Vincent, also stated that Zimmerman has been offered free guns, but has yet to accept any such donation.