Not long ago I received a call from a friend who told me he was busted recently for carrying his revolver in a chain restaurant. He wasn’t arrested, just ‘made’ when one of the food handlers noticed his large framed revolver peaking out from under the jacket of his coat in the shoulder holster.

To me, having to be told to leave the place of business simply because someone spotted the gun means you might as well leave the restaurant for good—there was no point in going out in the first place if you can’t enjoy where you want to go without the feeling that you can’t protect yourself while you’re there, but it brings up a subject that we seem to talk about every year—concealed carry for the summer months. When the weather gets warm, the clothes get skimpy and a lot of gun owners leave their concealed carry guns at home in the safe. Many shooters feel they have no way to practically strap on their handgun (that is without scaring the folks at the local stop and rob convenient store) or that they have to wear a jacket that will make them look more out of place than Nancy Pelosi at an NRA convention.

Then there is the guy who thinks that the visible fanny pack isn’t a dead giveaway that all is not right in the kingdom; these waist pouches are long out of style for everything including carrying your handgun and draw eyes as if you were wearing a members only jacket (no offense to any fanny pack carriers out there, just pointing out the obvious).

So the question persists, “What does a CCW holder do to keep operations running, May through September?”  The answer: get an intern.

Finding right gun for the job

The first rule of carrying concealed at any time is to get the right gun for the job, which during the summer may mean readjusting your expectations of the candidate and even your overall self-defense philosophy.  In warm weather you are almost never going to be able to strap on that big N-frame Smith & Wesson, Beretta 92, or other large handgun without either dramatically changing your body type or wardrobe (i.e. wearing a coat) so the first thing you need to do is think small. 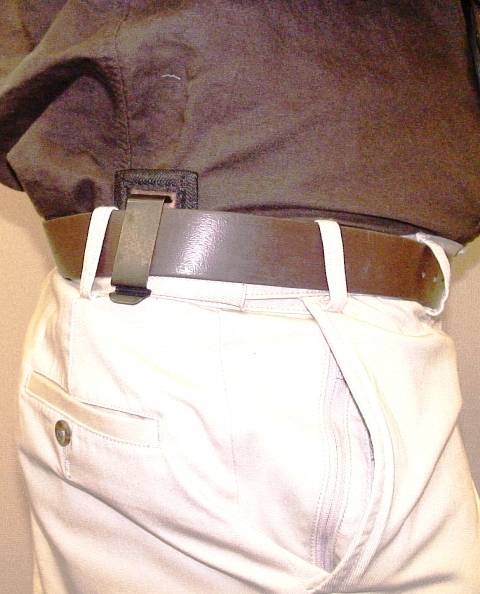 My choice has pretty much been a Smith & Wesson J-frame revolver for the past several decades. I have had a couple of Model 36’s before going to my current carry gun, a Model 649, but I have carried a Colt Agent and a Walther Model 8 in the past.

All fit well in various pocket holsters or, in the case of the little Walther, no holster at all (with many years of carry experience behind me, this did very well riding in either a pair of pants or shorts).  The point is, when you hire this gun for the summer, approach the candidate with and open mind and open heart and get comfortable with the idea that you are going to have to adjust to their strong points.

Inside the pants holsters may seem like the solution to larger carry pieces and they can work fine, but only if you don’t have any sort of a gut to contend with (something I and many other gun owners know quite well).  I have had more than one person approach me after buying an inside the pants holster with complaints that they are so uncomfortable that they hate carrying their gun. So much for enjoying your day out with your kids with both them and your gun digging into your hip!

As to wardrobe, pick clothing for only two reasons: comfort and carry. I rarely wear jeans anymore and instead favor khaki pants with cargo style pockets like those that have taken hold in tactical circles. I also have several pairs of shorts that have the same cargo style pockets and can hide a small weapon as well as any long pants. In truth, the cloths are really what can make or break a summer carry rig but their value isn’t in their flash but in their humbleness—the more familiar the outfit the better and this process has to start at the shopping mall. 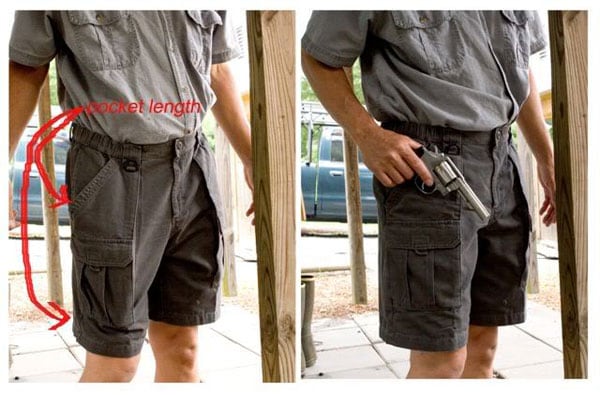 The best CCW summer interns can be all business during week but casual when appropriate. 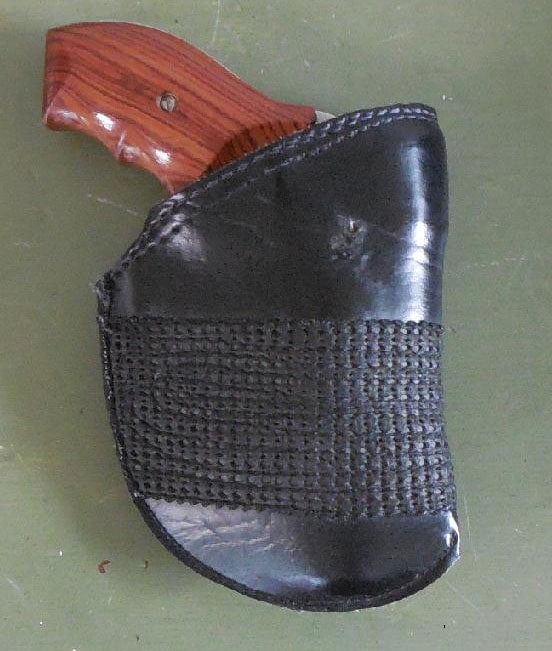 Model 649 in simple leather pocket holster. The best of these will secure the gun in the pocket and detach when drawn.

Whenever I evaluate potential carry apparel, I always check the pockets to see if they are deep enough to safely carry my Model 649 in the holster without it protruding or sliding around. This usually means going in the dressing room to try them out with your weapon—something I suggest any new carrier does discretely when shopping for carry duds because some of the most basic, readily available pants out there can be effectively co-opted into the most inconspicuous concealed carry outfits. Holster makers everywhere make pocket holsters, some of the finer ones I have used come from Don Hume which have a hook shape that catches the pocket of your pants or shorts and stay put while the gun comes free.

People I know have often said they were surprised that I was not carrying a handgun until I discreetly informed them (and only them) that I was in fact carrying a firearm. These people were stunned at how well I can keep that gun out of sight mostly because of how “normal” my dress appeared on the surface.

The best interns are usually the ones that keep their heads down and do their jobs quietly.

Where are you located? 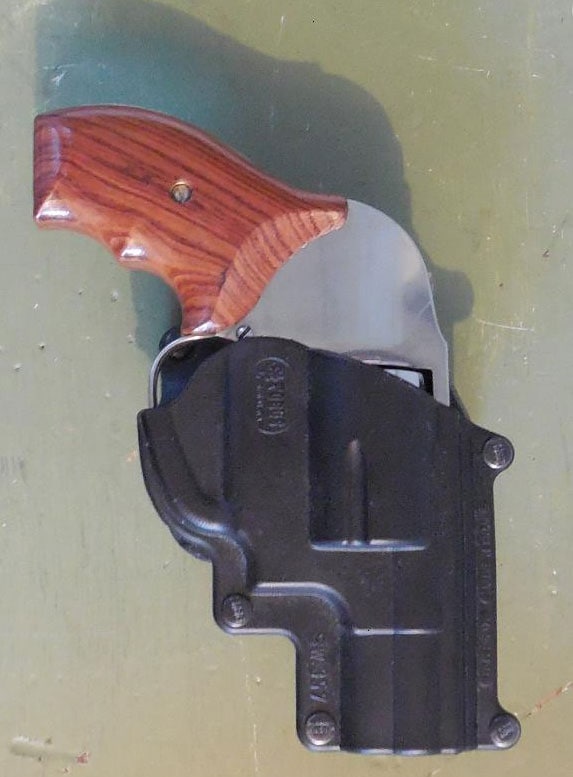 So what if your summer CCW internship takes place where the public really isn’t, like a hiking trail or out camping in the backcountry? This is where I say you find a candidate you know you can let your hair down with a little bit more for ease of carrying the gun, no matter what gun it is. You are much less likely to run into people in the numbers that you would in a mall or at the beach so concealing the handgun at all isn’t as important as practicality.  Also, consider what else you may be running into out in the wilds—namely lions, tigers and bears—so it’s in your best interest to pick an intern with some attitude.

If I do go out with my S&W Model 27 .357 Magnum in the woods, I use either a SimplyRugged pancake holster or a vintage George Lawrence hip holster. Recently, for the first time in a long time, I went away from leather and picked up a Fobus holster for my Model 649.  This holster carries the little revolver securely without worry and gives me access to the gun in a hurry. 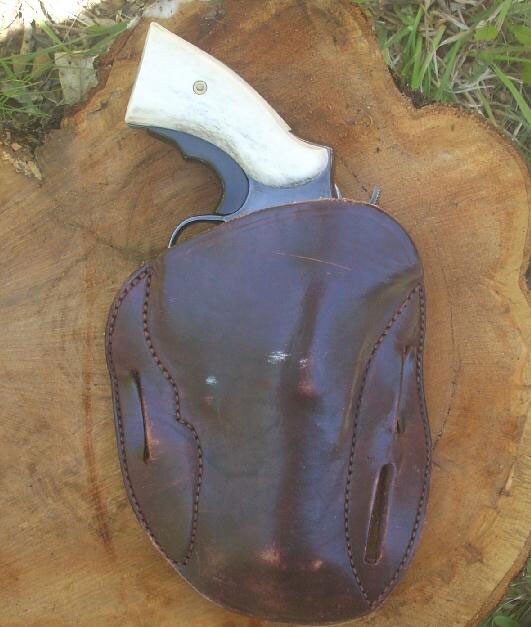 SimplyRugged pancake holster with Smith and Wesson peeking out.

Sometimes you need an intern who’s less subtle and little more aggressive to get the job done right.

Will you have my back(up)?

I have had a couple people ask me why I would limit myself to a gun that only carries five or six rounds, even though most gunfights don’t require even that many. The answer is that I don’t—I tote along a HKS speedloader in one of my cargo pockets which gives me five more rounds, and those little J-frame speedloaders take up less room than a set of keys or even a cell phone.  The point here is you don’t want to chose a summer intern that just shows up, does their job and then clocks out—you want one that can work overtime when necessary and have your back when the SHTF. 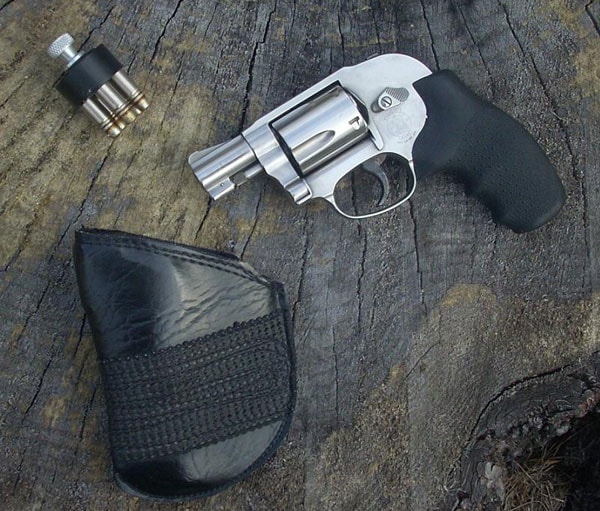 There are plenty of guns out there every bit as practical as my little J-frame that are small enough to conceal both the gun and a magazine/reload. The Ruger LCP, LCR, and LC9 along with pistols like the Kel Tec .380, and many others all can be carried along in a pocket holster and an extra magazine without much fuss. There are really no excuses for leaving a reload let alone your carry gun behind with all of the options out there.

So now that the warm weather is here, make your final decision on that summer carry gun, put on the shorts and head out, knowing that you will still be able to protect you and your loved ones.  I guarantee you that the crooks are not going to let the weather bother them in the least little bit and your little summertime internship could lead to full time employment.