Larry Potterfield's "The Bear that Killed a Bear!" 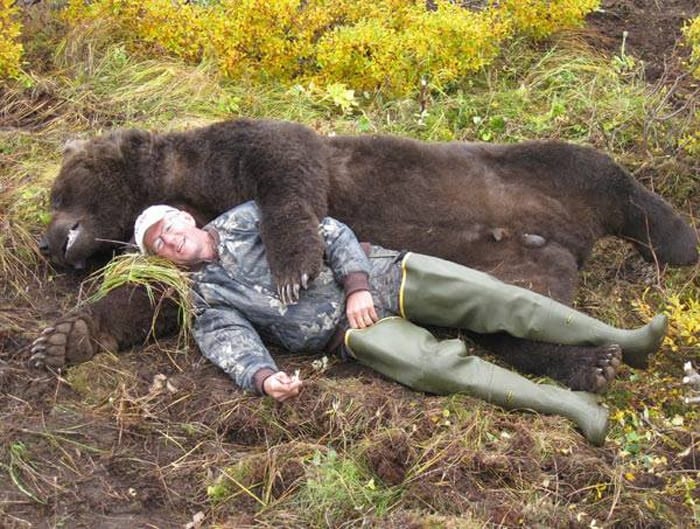 The picture above is bizarre in so many ways, but we like it and the story attached to it. Recently, MidwayUSA customers got the chance to vote for their favorite “Larry’s Short Story,” the company announced via Facebook. And thousands of Customers weighed in, and when the final vote was cast, the clear winner was “The Bear that Killed a Bear!”

This story tells the tale of a bear hunt where Larry shot a bear only to find that it had in turn killed another bear and was guarding its buried kill. Enjoy!

We saw him just at last light, way off to the south, as he lumbered down out of the willows toward the lakeshore — wow, was he big!

Next morning we climbed a steep hill on the opposite side of the lake, which gave us a great perspective of that entire area from about 1,200 to 1,500 yards distance. It was beautiful, but hazy, October day and we saw several bears come and go around the lake. Early in the afternoon a large sow and two cubs walked down the far shoreline and a big bear suddenly came out of the bushes and chased them away — it was our bear.

We quickly descended from our perch and crossed the lake in a small boat, landing a half-mile down the shore, for the best wind. Our stalk was inland at first, aiming to cut off his escape to the willows at the base of the mountain, should he sense us.

Then we turned back toward the shore and my guide put me up front as we got near. I led quietly onward, through intermittent waist-high brush, with my .375 H&H at the ready. The bear was lying out of sight on a large mound of sod, but at 60 yards he sensed our presence and raised up on all four legs, giving me a two second broadside opportunity. One 300 grain Nosler Partition in the should as he started to move, and another as he tumbled around on the ground, and the first part of this was over — but wait, there is more!

Walking up on the kill site we found that our bear had stripped most of the side in a circle nearly 50 feet in diameter and formed the mind he was standing on when I shot — interesting! We presumed he had killed a moss the night before.

While the guides were skinning the bear, Brenda got my shovel and started digging in the mound of sod. Oh my gosh; the bear had killed another bear, and not a small one either. We dug out both front feet and the head to get an idea of his size, but then left him to nature.

So, that’s the story of the bear that killed a bear.