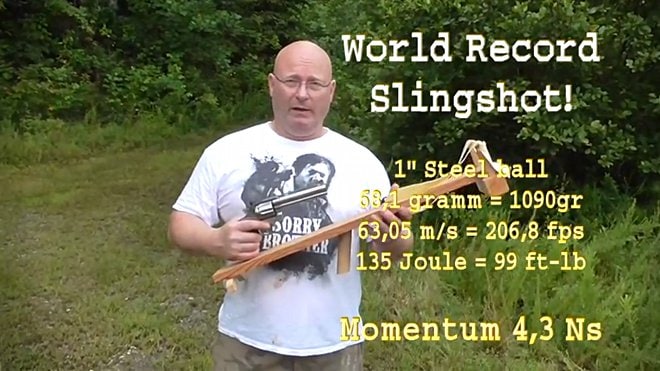 “Wrist braced slingshots are illegal in Germany, and in several other countries too. But of course The Slingshot Channel must also cover this potentially strongest type of a rubber powered hand shooter! Therefore, the team went to Greenville, South Carolina, USA, in order to do things that would be a no-no in our German headquarters.

“The ugly, clumsy, but very effective model shown in this video is based on a three ft long wooden plank, a handle, a forearm rest and a fork made from two round rods. This design protects the shooting hand and allows crazy amounts of rubber. With 195 cm of a draw length, this slingshot shoots the 1” steel ball at 206,8 fps (63 m/s), making it the strongest handheld one man operated slingshot ever shown on all of YouTube.

“The momentum achievable by this record slingshot is — in theory — higher than the value most handguns can achieve. The .22, the 9mm, even the 357 SIG and the famous .45 ACP all have momentum lower values. Only the mighty .44 Magnum outperforms the slingshot, at least on paper.

“But is it true? Can it be for real? This video puts that theory to a test. A large, heavy pendulum with a thick rubber mat in front of a steel plate is the proper test device. See how the handgus fare against the slingshot! You will be amazed by the outcome.

“NOTE: Please don’t get us wrong — handguns achieve far higher energy levels and also the pressure per square inch is a lot higher. In terms of penetration, a slingshot has little chance against guns. We are NOT degrading guns whatsoever. But for the sheer destruction, a slingshot is really good.”

A “The Slingshot Channel” production.

Incidentally, the reason the .44 Mag had less of a measurable effect on the plate is because it deformed it; they’re right in that it has more energy than their slingshot, but by bending under the power of the .44 the plate redirected the momentum, which is why it swung less.