A new small arms company is starting up in Ridgeland, Mississippi, called Talon Ordnance, which will focus on “tactical” weapons for self-defense, 3-gun competitions and law enforcement and military duty. But not all are pleased with the town’s new addition.

The company plans on making “advanced, proprietary, premium, service-grade weapons,” according to their website. Like a handful of other new companies that have started recently, Talon is planning to introduce their AR-15-pattern rifle first. “Not simply building a weapon to military specifications, TALON is producing a rifle that is superior in nearly every way to models currently on the market.”

Talon Ordnance’s products will be 100 percent American-made, and it will be the first small arms company of its kind to originate in Mississippi. Talon is expected to employ 10 people as they set up the groundwork and about 50 when they are in production.

The company will eventually expand to make handguns and shotguns in addition to rifles. 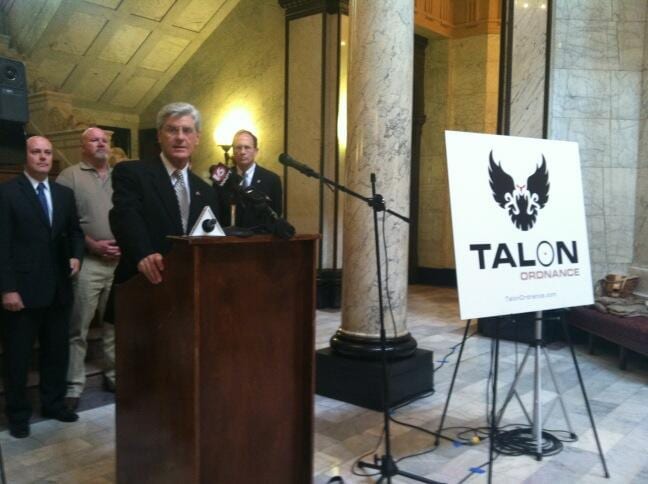 Mississippi Gov. Phil Bryant tweet a picture of himself at the opening ceremony. Although the company will only bring 10 jobs to the state, he said he’s excited about it.

“Firearms produced by Talon will be premium, service grade weapons that are superbly durable and consistently functional through even the harshest conditions,” said veteran, reservist and company CEO Clay Baldwin. Talon’s mission is to supply our military warriors, law enforcement guardians and civilian patriots with weapons that they can stake their lives upon.”

Talon’s founders including Baldwin selected Mississippi for both personal and political reasons. Baldwin is a Mississippi native and recently local politicians have been pushing to make the state more appealing to firearms manufacturers.

“Weapons manufacturing is a highly researched, highly recruited industry and we are proud to be a homegrown effort that will remain based in Mississippi,” said Baldwin.

Gov. Phil Bryant welcomed Talon to his city at their launch ceremony. Additionally, Mississippi speaker of the house Philip Gunn has been courting manufacturers that have been put out by recent changes in their state’s laws, including Magpul of Colorado.

However, not everyone’s happy with the new business coming to their home town. Following the welcoming party was a protest at the governor’s mansion.

WLOX.com – The News for South Mississippi

“All they’re going to do is bring more violence on the streets,” said protester Albert Barber Sr. “And even though you need guns to protect you in your house, you need … a law to control the guns.”

“If you’re gonna legalize these guns being made right here in the state of Mississippi, you might as well legalize heroine,” protested Hinds County Supervisor Kenneth Stokes.

“Blood money from guns is similar to blood money from dope dealers,” said Stokes. “They destroy lives and we don’t need blood money in Mississippi. Yes, we need jobs but not that badly that we are going to let them bring more guns and have more babies being killed.”

“Responsible firearm ownership is certainly a freedom we maintain in this country, were devoted as a company to encourage and promote the safe use, and lawful use of this product,” said Baldwin.

“Linking guns to be produced by Talon Ordnance with illegal gun violence is the same as linking vehicles produced at the Nissan plant with drunk driving,” added Baldwin. “Both assertions are absurd. As previously stated, Talon advocates the safe, responsible, lawful use of firearms.”