If one is curious to know why gun owners will ultimately beat back gun control proponents and prevail in the battle over tougher state and federal gun laws it’s because we are far more politically engaged than the opposition.

In short, the battle over our Second Amendment rights is a battle of wills.  And we care more about our right to keep and bear arms on average than they care about taking it away from us.

This fact was made readily apparent by a new Pew Research Center poll, which found that 25 percent of those who prioritize gun rights say they have, at some point, contributed money to an organization that takes a position on the issue, compared with just 6 percent of gun control activists who’ve done the same, according to a survey taking back in May. 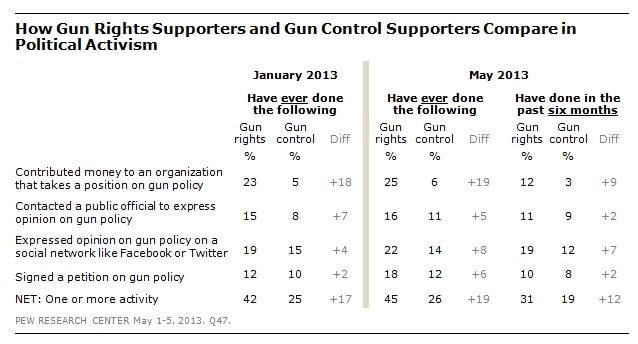 To put it another way, we are four times more likely to put our money where our mouth is than gun control proponents.  This should be reassuring, especially if one subscribes to the “golden rule,” who has the gold makes the rules.

Though our efforts go beyond just money, we also do a better job reaching out to our local representatives and lawmakers.  The May 2013 poll found that, overall, 16 percent of gun rights advocates have contacted a public official to express an opinion on gun policy, compared to 11 percent of gun control supporters. 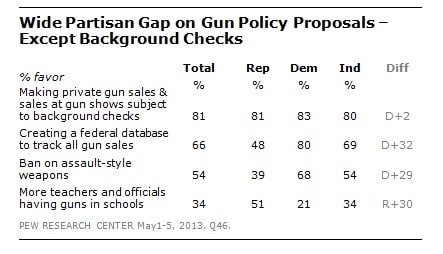 With respect to social media, we’re more outspoken. Pew found that 22 percent of gun rights supporters have expressed an opinion on gun policy on a social network, like Facebook or Twitter, compared to 14 percent of gun control supporters.

Gun owners are also more inclined to sign a petition supporting our cause, beating out gun control proponents by a margin of 6 percentage points, i.e., 18 percent compared to 12 percent — those number hold up even when factoring in a recent petition backed by New York City Mayor Michael Bloomberg’s pro-gun control organization, Mayors Against Illegal Guns, that garnered 1.5 million signatures in support of expanded background checks. 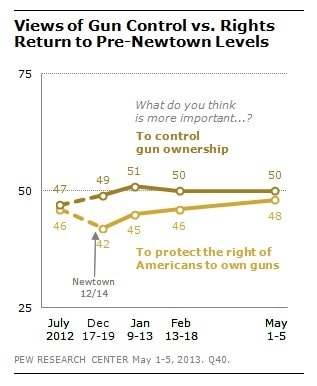 These poll results were not a surprise to Danielle Thompson, a spokeswoman for the National Association for Gun Rights, who said activism in the gun community is at fever pitch, given the assault on gun rights and gun ownership in the wake of the mass shooting at Sandy Hook Elementary in Newtown, Connecticut.

“We’ve seen the majority of our donations come in when Congress is trying to pass legislation restricting gun rights,” she told U.S. News. “And any time you see the government encroaching on second amendment rights we see people going out and buying guns, buying ammo, showing the government that their liberties are not going anywhere.”

Indeed.  If the past six months or so have taught us anything it’s that gun owners will not back down from the fight.  And we will continue to fight tooth and nail to protect our Second Amendment rights.

That said, the battle is far from over.  According to Pew, the public still believes, by the slightest margin, that it is more important to control gun ownership (50 percent) than it is to protect the rights of Americans to own guns (48 percent).

There is also strong public support for Universal Background Checks at gun shows and transfers made via the Internet (81 percent) and majority support for a ban on so-called ‘assault weapons’ (54 percent) and a federal database (66 percent) that would track all gun sales and keep records of law-abiding gun owners.