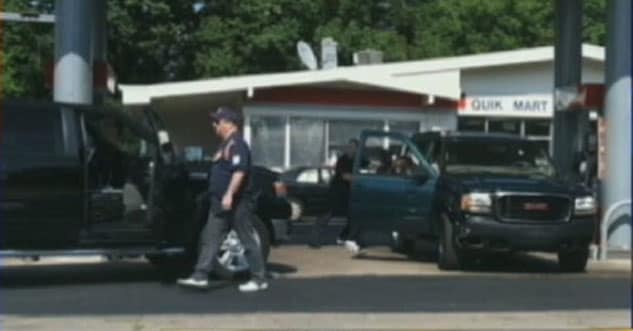 Two men who were originally thought to be impersonating police officers when they apparently robbed and pistol whipped two men at a gas station, turned out to be real, off-duty, highly-decorated Detroit police sergeants. The victims stated that the officers took their wallets and cell phones.

A witness captured pictures of the incident on a cell phone, which later helped to identify the two officers.

“Several unidentified police officers were working this particular robbery case, recognized one of the suspects in the photographs as being a member of the Detroit Police Department,” Detroit Police Chief James Craig said on Monday.

The two officers were arrested and later released.

“At this time, there is no evidence to support that both sergeants were involved in any other police impersonation cases that have been reported in recent weeks,” Craig said. “Know that if we have officers engaging in criminal misconduct that we will investigate. We will always be transparent about this business and making sure that our community is aware of how we’re conducting our investigations.”

Attorney Todd Flood stated, “I think there is going to be a totally different story to this case. These are two highly decorated police officers. They’re not rogue cops. They’re not cops out on the street trying to take down innocent people. This is a situation where there’s more to it than what meets the eye or what’s being reported.” Flood did not elaborate.

Apparently, there’s an unconfirmed report that one of the officer’s teenage daughter was recently robbed and the officers tracked down the men responsible.