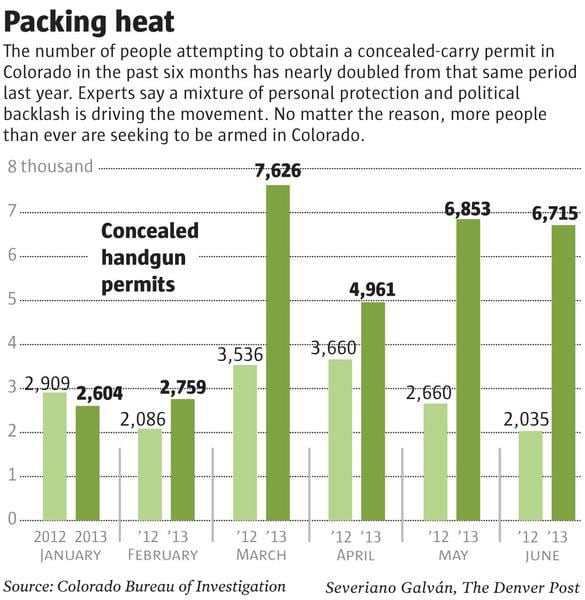 In a trend that’s being seen across the country, concealed carry permit applications have skyrocketed in Colorado. (Photo credit: The Denver Post)

Since the beginning of the year, concealed carry permit applications in Colorado have continued to climb higher each month, with the past four months reaching record highs, doubling and almost tripling from last year’s numbers.

In fact, the demand for concealed carry permits in the state has increased so much that additional staff was hired in order to keep up with the applications, Arapahoe County Sheriff Grayson Robinson told The Denver Post.

And opinions vary on what’s motivating the sudden, yet, steady climb in numbers.

Hillary Potter, an associate professor in the department of sociology at the University of Colorado at Boulder, believes that the spike in concealed carry permits is a result of increasing gun control legislation.

“A lot of people are concerned with what the government did (by passing gun-control laws) and they are feeling restricted,” she said. But Potter also feels that it’s “groups spreading fear.”

Colorado State Sen. Morgan Carroll agrees. “The demand has been artificially created,” he said. “Many groups have been telling people these laws will take guns away, which is not true.”

However, the general manager of the Centennial Gun Club in Denver, Richard Abramson believes that it’s more about personal responsibility and people starting to realize that by the time they become a victim of a violent crime, it’s usually too late to depend on the police.

“More people are realizing they are responsible for their own protection,” he said. “We have 500 students a month going through the courses.”

Abramson also points out that a large majority of first-time gun buyers and those seeking concealed carry permits are women. “Our women’s-only classes fill up the fastest,” he said.

One woman, Catherine Williams, decided to take a concealed carry class when she saw a New Jersey mother brutally beaten in front of her young daughter by a man during a home invasion. The entire event was captured on the mother’s nanny cam and the video went viral, leading to the man’s arrest days later. 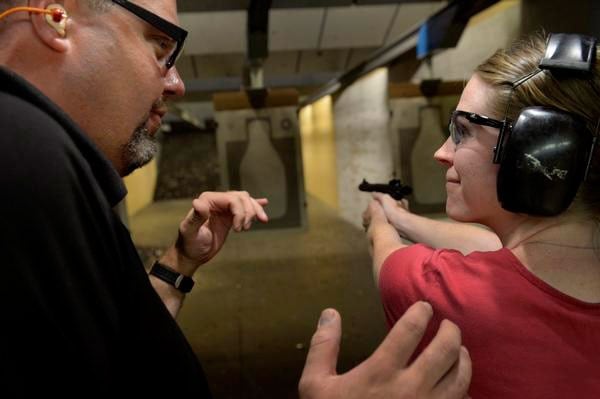 A violent attack of a NJ mom caught on her nanny cam prompted one woman to attend a concealed carry class. (Photo credit: The Denver Post)

As Jeffrey Lin, associate professor in the department of sociology and criminology at the University of Denver, explains, “Predatory person-on-person crime is not increasing.” Lin also maintains that it’s impossible to know the exact reasons for the increase in concealed carry applications.

Regardless of the reason more Colorado residents are seeking concealed carry permits than ever before, Robinson explained that the vast majority of those applicants are “the right people” who understand and respect the responsibility of possessing such a permit. “We have few denials,” he said, but most are law-abiding citizens who have the right to carry a firearm.