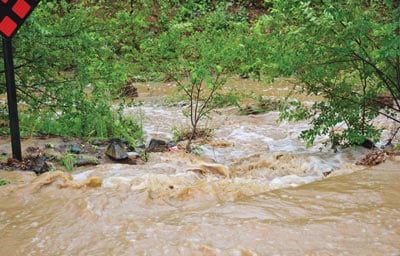 Ruger announced today that production has resumed at its Prescott, Arizona, manufacturing facility yesterday after it was forced to shut down last week.

The facility was hit by a severe thunderstorm and heavy precipitation on July 25, which caused a portion of the roof to collapse, according to the press release. Fortunately, no one was injured in the accident, but the damaged roof allowed a significant amount of water to enter the building. In all the estimated damage, including inventory and equipment, is set at less than $5 million.

Prescott’s The Daily Courier quoted an unidentified source who claims to have witnessed the event saying, “It was terrifying. They evacuated the whole building. The ceiling opened up. A flood of water came in. … It went everywhere, all over the machine, all over everybody. The roof caved in.”

The newspaper added that mother nature dumped 1.48 inches of rain during that storm and increased the level of precipitation for the month of July by 164 percent — or an additional 1.54 inches.

“Thanks to the hard work and dedication of our Prescott employees, temporary repairs were completed over the weekend and signed off by the structural engineers, which allowed production to resume,” Ruger said in the statement.

Ruger has reported strong earnings for the past several months and analysts expect the company to continue to grow, as it has since the tragic shootings and push by lawmakers for more stricter gun control laws. Since April the company’s stock has seen at least a 2 percent gain in price.

In fact, today, the company will release its second quarter earning report and file its quarterly report on Form 10-Q. The 10-Q is unique because publicly traded companies are only required to file three of them a year, along with an annual report. Although it’s unaudited information and less detailed than an annual report, it is still gives a strong overview of a company’s financial state and valuable insight for investors.

And to top it off, Ruger announced earlier this month that they’re expanding the company, opening manufacturing facilities in Mayodan, North Carolina. The first major expansion for the company in 25 years.

Ruger will be moving into a Mayodan industrial complex that previously housed a yarn plant, which has 194,950 square feet of manufacturing space and 26,650 square feet for administration.

The 24-year-old Rockingham county facility, Unifi Plant 15, was listed for sale for $1.2 million.

Including the facility in Prescott, the company already operates in several states including Connecticut and New Hampshire.