A violent fight erupted in the lobby of the police records division inside City Hall of Beaverton, Oregon, last Friday when a teen grabbed an officer’s gun and fired a round.

Shortly after 6 o’clock Friday night, 18-year-old Seattle native Jared Steven Leone, burst through the doors of City Hall, frantically telling the clerk that he was “overdosing on mushrooms”, court records said. Several officers contacted the deranged young man, who was pacing nervously around the room.

Obviously agitated, Leone slammed his head against the bulletproof window before running circles throughout the lobby. Sgt. Robert Davis, Officer Jason Billing and Officer Pan Yazzolino of the Beaverton Police Department made contact with Leone. Moments later, Leone lunged towards the officers.

In the ensuing altercation, Leone grabbed Sgt. Davis’ gun and fired a single shot into the wall. Police said they “tased” Leone seven times throughout the duration of the fight — drive-stunning him instead of firing the probes — but it had little effect. 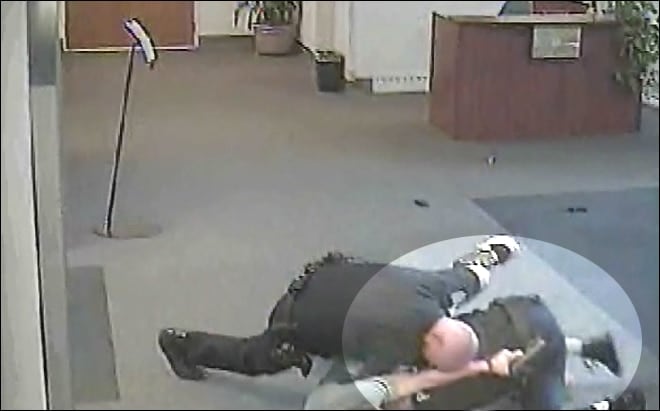 Several other officers quickly responded to the scene where Leone was subdued and handcuffed, but not before Davis sustained a shoulder injury. He was treated at a local hospital and is currently off-duty, recovering.

Leone was taken to a local hospital where he was declared fit for incarceration before being booked into the Washington County Jail, where he remains in custody.

Leone was arraigned in Washington County Circuit Court Monday afternoon, charged with two counts of assaulting a public safety officer, three counts of unlawful use of a weapon and one count of possession of a controlled substance.