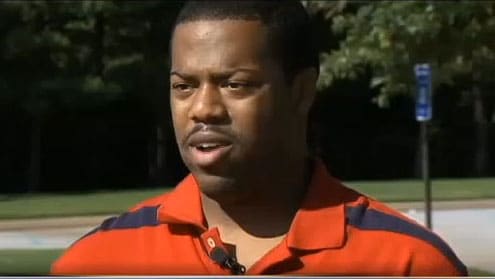 Chad Pollard said he truly felt in his soul that McAfee was going to pull that trigger. (Photo credit: My Fox Atlanta)

A man attempting to rob a Waffle House in Union City, near Atlanta, early Monday morning had his plans foiled when an armed patron shot him.

Chad Pollard was at the restaurant with his childhood friend, Jonathan Sutton, along with about a dozen other customers when the attempted robbery occurred. Pollard is a security guard and Sutton is an Atlanta police officer. Both men were off-duty at the time, but both men were also packing pistols.

It was just before 2 o’clock a.m. when 20-year-old Aston McAfee entered the establishment wearing a black bandana over his face and a hoodie. Witnesses said that as he waved his gun around, McAfee apparently said, “Nobody move and open the cash register.”

Pollard told a local news station that as McAfee just kept pointing his gun back and forth. “When the gun was in my face I just thought I was going to die right then and there,” Pollard said, admitting that all he could think about at the time was his family.

But when McAfee trained his gun on Sutton’s head, then looked away for a split second, Pollard knew that he had to act.

“I felt that not only my life, but everyone’s life was in danger, so I had to do what I had to do,” Pollard said. And before McAfee could harm anyone or get any cash, Pollard pulled out his own gun and fired two shots, striking McAfee. 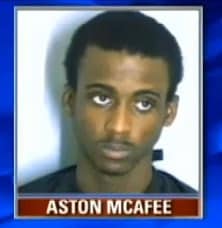 Aston McAfee was also arrested for assault a few months ago. (Photo credit: My Fox Atlanta)

“Everybody was scared and when I eliminated the threat, everyone felt calm. He came in and I did what I could,” Pollard said.

Pollard, who also is a former Atlanta firefighter, then handcuffed the suspect and held him at gunpoint until police arrived.

When officers arrived at the scene, they found McAfee lying on the floor, bleeding profusely from the gunshot wounds and saying, “Man, I’m just trying to get some money for my baby.”

McAfee was transported to a local hospital where his condition is not currently known, but he remains under police custody.

Other than McAfee, no one was injured during the incident and no charges are expected to be filed against Pollard, who acted in self-defense and is now being hailed a hero.