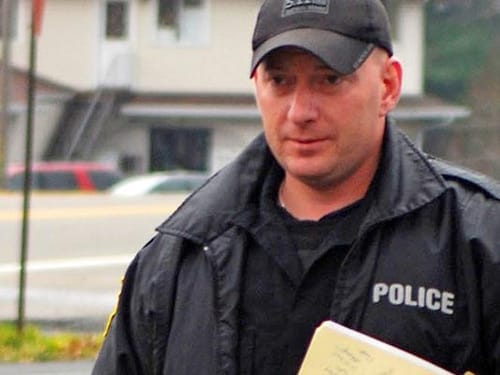 A Pennsylvania police chief has found himself in a bit of hot water after posting several profanity-laced videos to YouTube, denouncing “libtards” while firing the department’s fully automatic weapons.

According to a CBS affiliate, Gilberton Police Chief Mark Kessler has been suspended for 30 days without pay for “using borough property for non-borough purposes without prior borough permission” in several of the videos, including one titled “Kerry & UN, can SUCK IT.” Kessler expressed in the video, “F*ck all you libtards out there, as a matter of fact, read my shirt,” which displays, “Liberals take it in the a**.” He later posted another video apologizing for the offensive content. Well, sort of.

The Gilberton Borough Council met for a 55-minute session Wednesday night and voted 5-1 on the decision to suspend Kessler.

During the session, protesters gathered outside – some in support of Kessler and his right to free speech, others appalled at the decision to merely suspend him and calling for termination of his employment.

“We ended up getting 20,000 signatures asking for him to be fired. This suspension is totally inadequate,” Michael Morrill of Schuylkill County stated.

Gene Stilp of Dauphin County added, “This gentleman should be fired. He’s bad for Pennsylvania, he’s bad for the second amendment and gun owners like myself.”

But many stood outside the session waving flags, carrying firearms and holding signs which showed support for Kessler. The words “Legalize the Constitution” were written on one, while another read, “Free Speech. Right to Bear Arms. Welcome to America.” 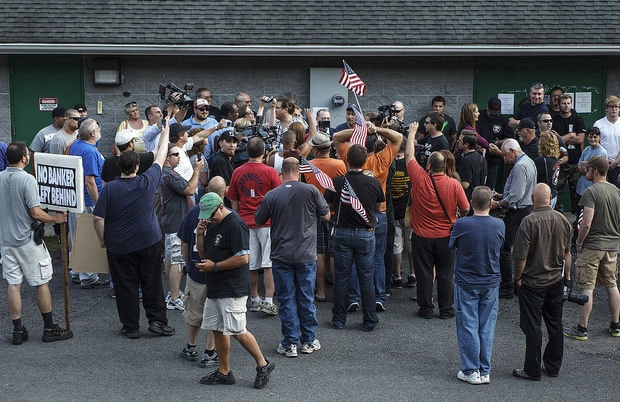 Protesters, both for and against Kessler’s suspension, gathered outside during a meeting of the Gilberton Borough Council. (Photo credit: Penn Live)

However, Gilberton Mayor Mary Lou Hannon reiterated that the decision wasn’t about Kessler’s right to free speech, but rather “it was just the misuse of borough property.” Property referring to the weapons Kessler used in the videos, which he had reportedly donated to the department earlier this year. Hannon participated in the meeting, but was not allowed to cast a vote.

Hannon added, “I think it’s a blackened our eye a little, but we are a strong community. I feel I am a strong leader, and we will go on from here.”

The committee also passed new policies to prohibit Kessler from using his uniform or title for personal use.

“I respect their decisions and I will abide by their decision and that’s that. But the borough does not own the title, Chief.  I’m not changing. I will not bend to political hacks of pressure,” Kessler said.

Kessler doesn’t apologize for his actions and told reporters that he’s looking forward to resuming his duties in a month. And Kessler’s attorney, Joseph Nahas doubts that the 14-year veteran will lose his job completely.

Kessler also stated, “Regardless of what people say, they’re entitled to their opinion and so be it.”

“I make no apologies and I have no regrets,” he said.