Senate confirms B. Todd Jones as head of ATF (VIDEO)

By a razor-thin margin, Minnesota U.S. Attorney B. Todd Jones became the official head of the Bureau of Alcohol, Tobacco, Firearms and Explosives on Wednesday, as Democrats in the Senate narrowly defeated a Republican-led filibuster that was blocking the final vote on his confirmation.

To end the filibuster, Democrats needed 60 votes. They barely got there.

Sen. Lisa Murkowski (R-Alaska), who was thought to be a shoe-in for Jones, waffled during the procedural vote, initially voting against ending the filibuster but then, upon changing her mind, casted a vote to end the blockade bringing the total “ayes” to 59.

It took some convincing, though, as well as some last minute theatrics by some of her peers.

Sen. Susan Collins (R-Maine), who supported Jones’s nomination, essentially called a timeout and pulled Murkowski off the Senate floor so that the two could have a private conversation.

“I was concerned that she was being pummeled by both sides, and thought she might need a little break,” Collins told The Associated Press, joking that the two just spoke about a dinner party at Murkowski’s home.

It was after this conversation behind closed doors that Murkowski agreed to vote to end the filibuster. To explain her change of heart, Murkowski said that she thought Jones was still under investigation for his performance as U.S. attorney for Minnesota, but upon learning that it had ended and he had passed muster with most of the members on the Judiciary Committee, she agreed to end the filibuster.

“I think it was an important conversation to have with my colleagues on the Judiciary Committee — those that have been involved with the vetting,” said Murkowski. “That changed the direction for me.”

To get that 60th vote, Democratic Sen. Heidi Heitkamp, who was absent during the Wednesday hearing, had to fly in from North Dakota to cast her vote. According to reports, she had fallen ill.

Many saw Jones’s appointment as a win for both the Obama administration and for Senate comity, noting that the upper chamber has struggled with partisanship in the past.

“We’ve been able to march through some really difficult nominations like NLRB and EPA, and the last thing we want right now as we head into the fall, where I still think there is a good chance we could get some kind of bipartisan agreement on the budget and on the debt … is to leave with some radioactive blowup,” Sen. Amy Klobuchar (D-Minn.), a lead supporter of Jones’ nomination, told reporters. 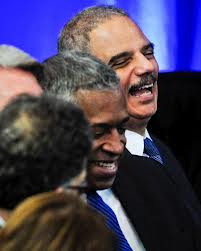 Obama praised both parties for putting an end to the stonewalling on his appointee, noting that Jones will be the first full-time ATF director in more than seven years.

“I applaud Senator Reid, Senator Leahy, Senator Klobuchar, and the bipartisan group of senators who broke through that gridlock to give Todd Jones the up or down vote he deserved,” Obama said in a written statement.

Though, Obama intimated that he is not done pursuing his gun control agenda.

“While Todd’s confirmation will help ATF apply the tools it needs to protect our communities from dangerous criminals and reduce gun violence, we can’t stop there,” said the president. “I will continue to stand with the majority of Americans who support common-sense reforms to keep dangerous weapons out of the hands of criminals.”

In the end, Jones’ confirmation is a win for gun-control advocates — hence the Brady Campaign’s strong endorsement of Jones.

Moreover, there’s little doubt that he will work with Obama and U.S. Attorney General Eric Holder to push their pro-gun control agenda. Given this fact, why is the National Rifle Association neutral on Jones?

Guns.com reached out to the nation’s gun lobby and that’s precisely what they said, they’re “neutral” on Jones.  NRA lobbyist Jim Baker, in an interview with the Associated Press, offered a little more insight.

“We haven’t seen anything that concerns us from the standpoint of gun issues,” Baker said of Jones.

This statement seems odd coming from an organization that has fought tooth and nail to stymie the president and his anti-gun agenda at every turn — does it not?  One could argue that the NRA paved the path for Jones’ confirmation by remaining indifferent, by not flexing its lobbying muscles, by not pressuring senators to vote against him.

Perhaps, the NRA knows something we don’t.  Whatever the case may be, we can only hope that Jones’ confirmation doesn’t come back to bite us.   We’ll see.