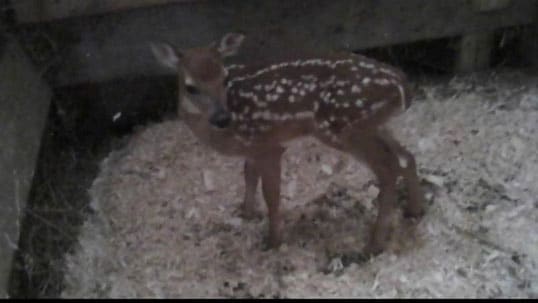 At the top of the government watch list: Giggles the baby deer. (Photo credit: WISN)

Two weeks ago a small army of agents showed up at the Society of St. Francis, a no-kill animal shelter in Kenosha, Wisconsin. While it appeared as if the fully armed agents were ready to bust a small drug operation, it turns out that they conducted the raid to capture and euthanize a 2-week-old baby deer.

“It was like a SWAT team. Nine DNR agents and four deputy sheriffs, and they were all armed to the teeth,” shelter employee Ray Schulze told a local news station.

Schulze explained that the fawn had been brought to the shelter, which is just miles from the Illinois border, by a family who thought that the animal had been abandoned by its mother. The small deer, still adorned with white spots, was named “Giggles” because, “When it made a little noise, it sounded like it was laughing,” Schulze said.

Giggles was due to be taken to a wildlife animal refuge the day following the shelter raid, but got carried away from the no-kill shelter in a body bag instead.

The Wisconsin Department of Natural Resources received two anonymous phone calls saying that the shelter was harboring a baby deer – which is illegal in the state of Wisconsin. State law does not allow the possession of wildlife without a state-issued permit. However, the law does have one exception: a small 24-hour window “to remove or transport the wild animal from one location to a more appropriate location.”

Apparently, the shelter had possession of the deer for more than 24 hours, thus making its presence illegal, providing cause for full-out surveillance of the shelter and subsequent raid and euthanizing of the 2-week-old baby deer.

A search warrant was obtained after the game warden prepared an affidavit, which included aerial photos of the shelter and accounts of surveillance missions in which agents described being able to see, from the cover of a nearby wooded area, the baby deer going in and out of the barn.

And when agents showed up at the shelter, “I was thinking in my mind they were going to take the deer and take it to a wildlife shelter,” Schulze explained. “And here they come carrying the baby deer over their shoulder. She was in a body bag.” Schulze continued to describe the ordeal, “I said, ‘Why did you do that?’ He said, ‘That’s our policy,’ and I said, ‘That’s one hell of a policy.’”

DNR Supervisor Jennifer Niemeyer and the agents deny that Giggles was killed at the shelter. They maintain that the deer was merely tranquilized and euthanized off-site.

Niemeyer also explained to a local reporter that they killed the deer for both the safety of the animal and other wildlife, as well as area residents, citing the fawn’s potential for disease or other dangers.

“These are always very difficult situations for both parties involved,” she said. “And we are empathetic to the fact of what happened because we know in our heart of hearts they tried to do the right thing.”

Niemeyer then likens the caring of the small animal to an illegal drug operation when a local investigative reporter questioned their use of resources. “Could you have made a phone call before showing up, I mean, that’s a lot of resources,” the reporter asked.

“If a sheriff’s department is going in to do a search warrant on a drug bust, they don’t call them and ask them to voluntarily surrender their marijuana or whatever drug that they have before they show up,” Niemeyer said.

Shelter President Cindy Schultz said she plans to sue the DNR and also questioned the use of taxpayer money on such an operation. “They went way over the top for a little tiny baby deer,” she said.