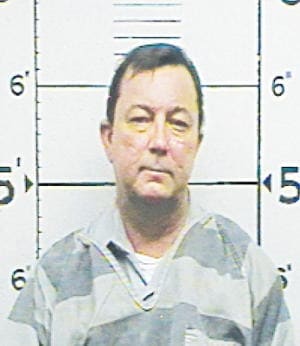 Bill Conover, on sort of a bad day, has mugshot taken. He appears to be 6’3″.

The 53-year-old was scheduled to appear at the Guinn Justice Center on Monday morning as the legal representative for a man who was facing felony chargers.  But when Conover attempted to enter the building, the metal-detector sounded off.

Conover does not have a concealed carry permit, but even if he did, it would have been against the law for him to carry it inside the courthouse, noted Johnson County Justice of the Peace, Ronny McBroom.

When sheriffs arrived on the scene they also discovered that in addition to carrying a concealed firearm without a permit, Conover’s blood-alcohol content exceeded the state’s legal limit, 0.08.  In short, he was drunk.

According to the police report, Conover said that he often carries a loaded firearm because he “had been threatened by former clients.”

However, in this particular instance, he simply forgot he had the pistol with him, Conover told the sheriffs.

Conover’s story was later reiterated by LuAnne Leonard, the secretary for the Johnson County Democrat Party, who said in a statement, “Today was an unfortunate mistake, coupled with poor judgment. The gun was located in a book that was in his attache case. He forgot the gun was there and inadvertently took it into the courthouse.”

But Conover’s attorney, Ben Hill Turner, worked his magic and Conover was let off easy.  He paid a $300 fine for the public intoxication charge and in exchange for having the gun-related charges dropped volunteered to go to a treatment center.

“I set the [bail] at $2,000 just because he agreed to go straight to a treatment center,” McBroom said.

Conover posted bail and was released from custody on Monday night.  However, his run-in with the law cost him his political career — at least for the foreseeable future.

On Monday, via email, Conover resigned as chairman of the Johnson County Democratic Party.

Perhaps this is a cautionary tale.  The lesson?  Don’t get drunk and then attempt to bring a loaded firearm into a courthouse.