Today the pump action shotgun is well represented by various offerings from Benelli, Remington, and Mossberg among many others and stands out as perhaps the best symbol of what modern firearm ownership is all about—personal defense, hunting and recreation all wrapped in a package so simple that even a youth can operate it (under the right supervision, of course).

This is pretty amazing considering the basic design employed on all of these weapons is over 120-years old.

Guns.com looks at five classic slide guns that, while no longer in production, remain as a testimony to the brutal versatility of the pump gun.

The bridge between John Browning’s 1897 open hammer pump action shotguns, and Winchester’s 1200 series was the Model 1912. Commonly just called the Model 12, this gun was hammerless, milled out of a solid block of steel, and hand-fitted for reliability. The six-shot tubular mag fed through the bottom while the action ejected through the right hand side. Over 2-million of these guns were made in a production run that lasted 50-years, which makes them one of the bestselling shotguns of all time.

As such they are sought after and while beater models can be had for $200ish, military marked or high grade M12s can go much higher. 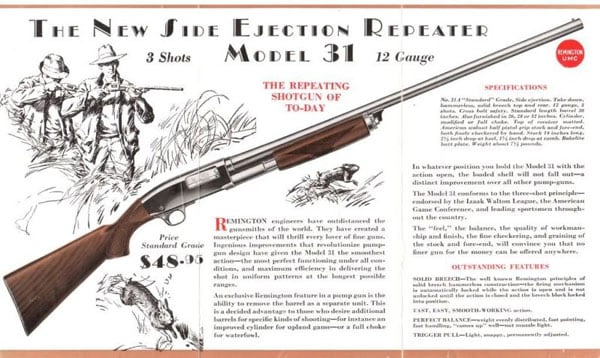 In 1931, unsung firearms techie John Pedersen, along with C.C. Loomis, helped launch Remington’s contender to the Winchester M1912. Ever a whiz at names, the company christened the new shotgun the Model 31.

A side-ejecting repeater with a fast lock-up and a ball-bearing action, the Remy 31 was easily optimized for various roles and over a 20-year timespan the gun was sold in some two dozen variants ranging from police to hunter to tournament skeet guns.

Chamberings for this gun, considered by many to be the best-designed pump shotgun ever made by the company, were in the period-standard 12, 16, and 20. Remington built 190,000 of these guns before closing the line in 1949 to make way for a gun called the 870.

Internally the gun has many aspects of the Mossberg 500s of today, only with a steel frame. Shooter grade versions of these classics can still be found for around the $300 mark, while ‘Premiere’ grade guns in excellent condition can cost as much as a good used car.

The ugly duckling of the shotgun world for years was the Stevens pumps. Always running a fourth place race with Remington, Winchester, and Ithaca, the Stevens Company went instead to the bargain market. Selling guns through Sears and Roebuck, often by mail order (this was before 1968), their Model 520 was a decent design.

The Model 620/621, with a rounded receiver and takedown action, replaced the first models and proved a popular hardware store and catalog item for thirty years. These guns were so well made and trusted that the Army bought nearly 50,000 of the two types for use as trench and riot guns during WWII and kept them around as late as the 1960s.

These guns can be found in commercial models for $150-$200 in working condition. If you spot one with ‘US’ markings though, get it checked before you buy, as it could be as fake as a $3 bill.

When you say Harrington and Richardson, the single shot break action pops into mind. What many forget is that the company reached out and made a line of pump guns around the time Ike was President.

From 1955-1967 the company made the 28-inch barreled 12/16/20 gauge Model 400 and augmented it with the .410 gauge Model 402 and adjustable choke Model 401. These 5-shot guns are as plain as a dateless wonder on prom night but scary reliable. Who needs a checkered stock or engraved scrollwork on the receiver side anyway? Won’t help you put meat on the table. 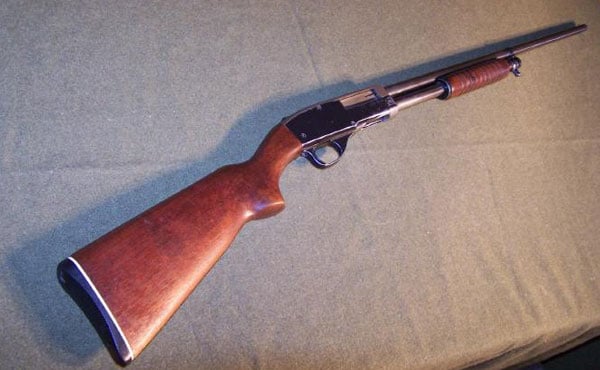 The neat thing about these vintage shooters is that if you have a $100 bill you can pick up just about any one you come across. Be careful about broken stocks and missing internals however, as parts for these aren’t too common.

The arms firm that Samuel Colt started in the 19th century cut its teeth on handguns and has dabbled off and on in rifles but in the 1960s, they also made a stab at the scattergun market. As it was a tentative step, they imported guns and rebranded them, much like Remington did with the Spartan line of Izmash Baikal guns of late.

From Sauer of West Germany they bought exquisite SXS box lock drillings. For a bargain pump action gun they contracted with Franchi of Italy to make lightweight aluminum frames that were married to parts made by Jefferson Arms and Manu France.

Put it all together and you have the gun they called the Coltsman.

These shotguns were made from 1961-65 and came in 12, 16, and 20-gauge chamberings. A pretty simple four shot tubular magazine rested under a 26 inch (improved), 28-inch (modified) or 30-inch (full choked) barrel. While collectable to some extent (how many Colt shotguns have you seen?) they are also affordable with shooter grade models popping up for around $200.

So with the above in mind, pay close attention to those beat up old school pump guns on the rack. You know the ones, with the dust on them. You may have a diamond in the rough.