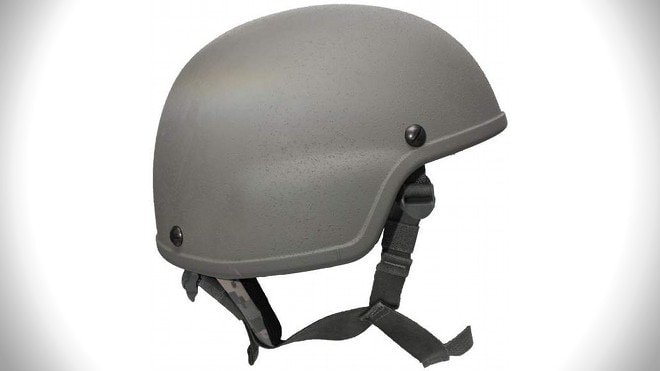 Two branches of the military, the Army and the Marine Corps, will be fielding an improved helmet that offers superior protection against incoming rifle fire. The Marines started issuing the helmet on July 30 of this year.

“Marine procurement officials placed an order for 3,850 of the helmets July 16 and will begin pushing those to Marines downrange or slated for deployment during the first quarter of fiscal 2014, which begins Oct. 1, according to Deidre Hooks, the team lead for the Enhanced Combat Helmet Team,” explains the Army Times.

“Ultimately, the Marine Corps plans to buy 77,000 of the helmets, enough to outfit a large contingent of deployed Marines. The helmet will be issued to those going into harm’s way: a deployment in Afghanistan, for example, or a Marine expeditionary unit headed to the Middle East. They are to be turned in when Marines return to garrison.

This comes after four years of work developing the helmet, called the Enhanced Combat Helmet or ECH. The Marines began the search for what would become the ECH in 2007, accepting designs from four vendors in 2009.

“This helmet is above and beyond,” said Kathy Halo ECH lead engineer. “It was tested and passed using the old standards as well as the new DOT&E protocols. The ECH surpasses anything we’ve had before.”

“The ECH fully exploits the latest lightweight material technology … It provides increased small-arms ballistic protection above what is currently provided by the Lightweight and Advanced Combat helmets.”

However, development of the ECH was not straight-forward, as the four initial helmet designs all failed to meet the requirements the Marines set forth, in either ballistics protection or blunt force protection.

Further materials research yielded a ultra-high-molecular-weight polyethylene material for use with the helmet, one that greatly exceeded the Marines’ original specifications. The design was by one of the smaller companies tapped by the Marines, Ceradyne Inc.

“We had hoped for a 35 percent improvement over the [Advanced Combat Helmet] in terms of ballistic protection and it’s way better than that,” said Col. William Cole. The helmet is capable of stopping a .30 caliber rifle round at point-blank range with no deflection.

By 2011, the Marines had cleared the design for a small production run, after which the helmet failed to perform. Ceradyne implemented a non-standard curing process to manufacture the helmets inside the Marines’ window, which set back the entire project.

At the same time, the Marines changed their testing protocols, using much more rigorous testing. What they discovered was that the design that was being readied for service had a few design flaws that had nothing to do with the curing process. Subsequently, the helmet was redesigned.

“One of the biggest challenges was the change in statistical methodology in the midst of the helmet testing,” Halo said. “Our program was the first test subject for DOT&E’s new approach.”

“We identified anomalies on the production line after the final first-article test was complete,” said Col. Mike Manning, program manager for Infantry Weapons Systems at MCSC. “We fixed it, and now we’re ready for production. We met every requirement of every test we’ve been asked to meet. I’d wear the ECH in a heartbeat.”

The new design is shaped almost identically to the Advanced Combat Helmet, or ACH, and will work with ACH accessories. It’s actually lighter than the Lightweight Helmet.

With all this going for it, it’s no surprise that the Army is making the switch as soon as possible. The Army is expected to start fielding the ECH in 2014, in October.