Kid Rock threatens man on crutches after failed break-in, offers $5k reward for capture, "Dont mess with a motherfu*ker like me!" 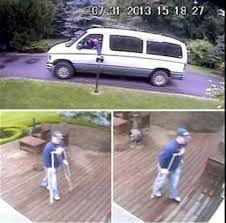 Kid Rock publicly threatened a middle-aged man on crutches who trespassed onto his property and attempted to invade his home earlier this week.

Last Wednesday afternoon a balding, white man rammed the gate to Kid Rock’s $730,000 Clarkston, Michigan residence, then hobbled to a building on the property, trying to break into it.

He continued, “Thank God I was not on the property at the time of this attempted break in. I am an avid hunter and marksman and I will not hesitate to shoot anyone who has myself or (my) family in fear for our lives,” Kid Rock wrote on his website.”

The suspect was wearing a blue baseball cap and a blue sweater, had a mustache and side burns, was a smoker, and may still be using crutches. He was driving a white van with tinted windows and was last seen in the area of Ortonville Rd and Hubbard on July 31st around 4:15pm.

Kid Rock is asking that anyone who may know the suspect’s whereabouts contact the Oakland County Sheriff Tip Line at 1.800.773.2587 and is offering a $5k reward for any information leading to the suspect’s arrest.