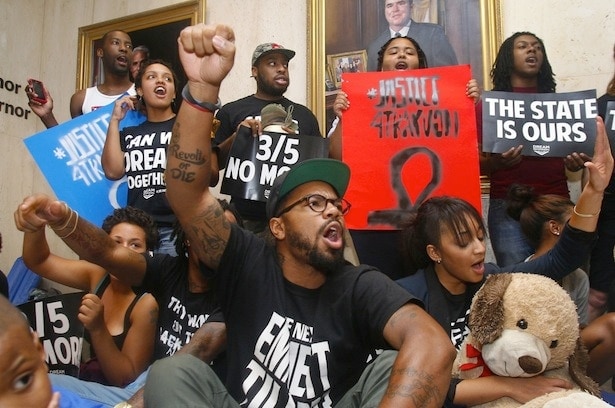 The Dream Defenders staging a protest at the Florida statehouse where they made themselves at home.

Chalk it up as a victory for the Dream Defenders, the protestors who’ve spent almost three weeks camping out on the floors of Florida’s Capitol building, as Florida House Speaker Will Weatherford admitted on Friday that he will order a hearing on the state’s controversial ‘Stand Your Ground’ law.

But while the battle may be won, the war isn’t over.  Weatherford instructed state Rep. Matt Gaetz (R-Fort Walton Beach), a backer of the self-defense law that allows one to use force, including deadly force, in a public places, to chair the hearing.

“I don’t support changing one damn comma of the stand your ground law,” Gaetz said Friday. “It would be reactionary and dangerous to make Floridians less safe to pacify uninformed protesters.”

Yet despite his opposition to changing the law, Gaetz said he favors holding a hearing — just so he can prove to the non-gun owning public that the law is, in fact, common sense.

“I want to have hearings, it’s a good idea,” Gaetz said. “Right now, the only voices on stand your ground are coming from the radical left. I want an opportunity to give a full-throated defense of the law.”

But one should note that Florida has already reviewed the law.  Last year, Gov. Rick Scott assembled a 19-member, bipartisan panel to examine the law and determine whether it was a threat to public safety.  The panel’s finding was not all that surprising.  In short, there’s nothing wrong with the law.

“The task force concurs with the core belief that all persons, regardless of citizenship status, have a right to feel safe and secure in our state. To that end, all persons have a fundamental right to stand their ground and defend themselves from attack with proportionate force in every place they have a lawful right to be and are conducting themselves in a lawful manner,” the panel’s draft recommendation stated when it was published in November of 2012.

But Agnew and the Dream Defenders are holding on to hope that this time, in the wake of the acquittal of George Zimmerman in the shooting death of 17-year-old Trayvon Martin, the outcome will be different.

“The hearings will be an opportunity for people to discuss the laws,” Agnew said. “We will hope for the best and prepare for the worst.”

At the end of the day, whether it’s Congress reviewing the law or whether it’s the Florida Legislature, the result will ultimately be the same: a person has a natural right to self-defense in any place they have a lawful right to be.  ‘Stand Your Ground’ does nothing more but affirm and guarantee that right.