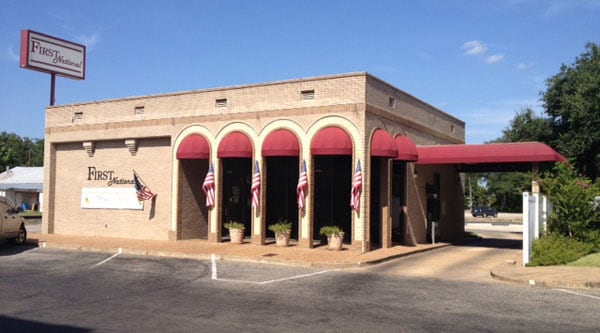 Investigators believe that the suspects knew the woman worked at the bank, but she did not know them. (Photo credit: KHOU)

A Texas man ended a bank robbery Thursday evening by shooting the two suspects, but not before they had bound and kidnapped both him and his wife.

According to a press release by the Colorado County Sheriff’s Office, the two suspects, later identified as 20-year-old Jordan Kutach and 21-year-old Preston Kutach, broke into the victims’ home in Columbus, Texas, where they found the man and bound him. The man’s wife later came home and walked into the unsuspecting nightmare.

With the husband bound and both him and his wife being held at gunpoint, the suspects forced the couple, whose identities have not been released, to get into the man’s truck and drive to the bank where the wife worked. They then forced the woman to open the bank vault to collect money for them.

The suspects then forced the couple back into the truck and instructed them to drive down the highway to an unknown location. It was while they were traveling on the highway that the husband, a reserve sheriff’s deputy, was able to gain access to a gun that he kept in the truck. He shot both men and called 911.

When officers arrived, they found the two suspects face down in a ditch, both suffering from gunshot wounds.

The investigation is still ongoing and many details have not been made public. Bank surveillance video did capture part of the robbery and investigators are talking with other witnesses who may have additional information.

The bank president, Sam Kana, told reporters that he is both thankful and blessed the couple was not injured.

The community, which was surprised by the incident, has rallied around the couple, showing their support during this difficult time.

“I’m sure that they’re both going to be upset for a while,” resident Brenda Buehler told reporters. “It’s a frightening thing to have happen, but I think everybody’s going to tell them good job.”

Another resident, Evan Mullins, reiterated Buehler’s thoughts. “It’s very positive to a community to hear that the good guy does win in the end,” he said.