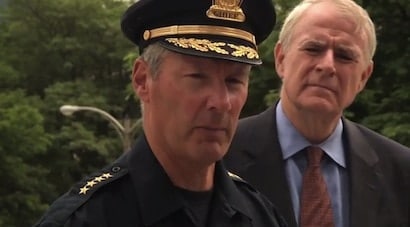 The two men are asking state legislators to enact a law that would create a 3-year mandatory minimum sentence for career criminals who are caught possessing firearms.

“We are asking for a change in state law,” said Barrett at a recent press conference. “If you cannot possess a gun and you do, there has to be a mandatory minimum sentence.”

The push for the new law comes as non-fatal shootings are on the rise 19 percent in the months of June and July, when compared to last year. To explicate, in 2012, police notched 121 non-fatal shootings. That number has swelled up to 144 this year.

“The culture of retaliatory violence is aided and abetted by the fact that it’s more dangerous to see your enemy without your gun than with it,” Flynn said, as reported by the Journal Sentinel.

Flynn further explained that it was no secret who was perpetrating the violence, i.e., convicts with a long rap sheet.

In other words, street thugs, drug dealers, serial rapists, etc. can continue to carry firearms without fear of getting slapped with a felony conviction, a charge that would prohibit them from applying for a concealed carry permit down the road.

Flynn said he is keenly aware of the ongoing debate over gun control in this country, but argued that finding real ways to curb violence transcends the political rhetoric that both pro-gun control and gun rights advocates propagate.

So, what are your thoughts? Do you support tougher gun laws that target career criminals? Or do you believe that this measure, if passed, would create problems for law-abiding gun owners?