San Antonio Home Invasion Turned Deadly for Intruder: ‘I did what I had to do’ (VIDEO) 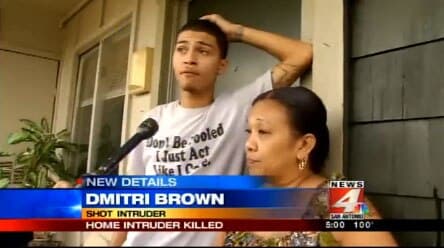 The victims were apologetic that the suspect’s life was taken but not remorseful. (Photo credit: News 4, San Antonio)

A home invasion early last Tuesday morning at an apartment complex in San Antonio proved to be a fatal decision for one of the suspects who died just outside the front door after being shot.

According to a local news report, 21-year-old Dmitri Brown was at his girlfriend’s apartment with four children inside, when she heard the three men at the door. Evangeline Tubig, 49, warned Brown not to open the door, but moments later the three men kicked it in.

The suspects, who were all wearing masks and gloves, entered the apartment and as one held Brown by the neck at gunpoint, the other two collected valuables.

Two of the children were able to run from the apartment, but the other two were left to witness the home invasion.

Once the three were finished taking what they wanted, they turned to leave and that’s when Brown grabbed his own gun and fired at them. He struck the suspect who had held him at gunpoint. He collapsed just outside of the doorway and was pronounced dead when police arrived.

Brown continued to fire at the other two as they drove off in a silver Dodge Charger, but there was no evidence that either of them had been struck.

Brown, Tubig and the children were not injured during the incident.

“I did what I had to do,” Brown said. “I protected my family. No hesitation. And I apologize for taking somebody’s father, somebody’s son, somebody’s brother.”

Neighbors say that crime has continued to rise in the area.

“We might end up moving out of this place, because it’s not safe here, obviously not. This is a bad spot,” Rogelio Cazares, who lives in the apartment complex, told reporters.

The incident is still under investigation and no charges are expected to be filed against Brown.