Your plane makes an emergency crash landing that leaves you a battered but marooned survivor. It’s just you alone in the elements. The only good thing is that your M6 will get you through the night and hopefully a speedy rescue tomorrow.

Ever since the dawn of the airplane, it became readily apparent that these high-tech flying machines had the possibility of crashing in some pretty remote and inaccessible places. Early pilots carried personal handguns and rifles with them on long distance flights for protection.

In WWI, pilots carried stripped down M1903 Springfields. In WWII, they carried Stevens Combination guns. After WWII the US military developed the M4 Survival rifle, a short collapsible stock .22 Hornet bolt action rifle made by H&R that could be stored as part of the survival gear of an aircraft to give stranded aircrew a small caliber tool for harvesting food and keeping away predators.

The M4 was neat but it only carried four rounds of this marginal ammunition and at just over 4-pounds, could have been a tad lighter.

That’s where the M6 came in. 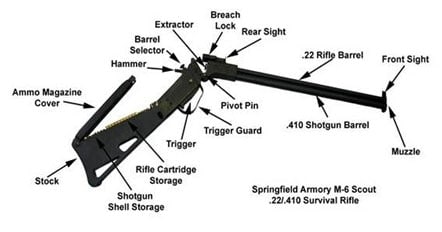 The M6 Air Crew Survival Weapon was a fascinating little combination gun. Taking a page from the German Air Force’s (Luftwaffe) WWII M30 survival rifle, which was a three-barreled gun that was in 12 Gauge and 9.3x74mm, the USAF wanted something similar but smaller.

Their design was a two-barreled over and under, break-action gun with a .22 Hornet on top and a .410 gauge shotgun on the bottom. Built for sustainability and survivability, it didn’t need to be cosmetically appealing which was a good thing.

It needed to be capable of taking small game such as rabbit and wild pigs for food purposes, but also capable of providing a margin of protection from wolves and predators all the way up to the occasional two-legged variety. Hence the two calibers. 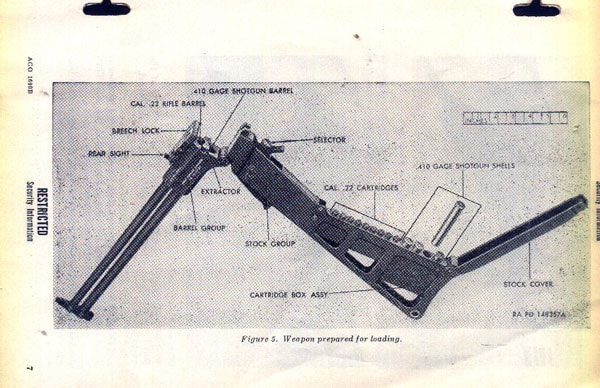 The .410 full-choked smoothbore lower barrel allowed the gun to take small birds and take potshots at squirrel and rabbit. The .410 shells used were special all-aluminum cased 3-inch shells filled with No. 6 chilled shot made on spec from Olin Winchester. The upper barrel was rifled with a 1:13 RH twist for the zippy .22 Hornet. Don’t let the caliber size fool you, the Hornet is a centerfire round that delivers twice as much power as a .22 Magnum downrange and has been used against predators, varmints, and even deer. While the single-shot M6 wasn’t designed to go into combat, the Hornet did allow a (very marginal) self-defense capability. 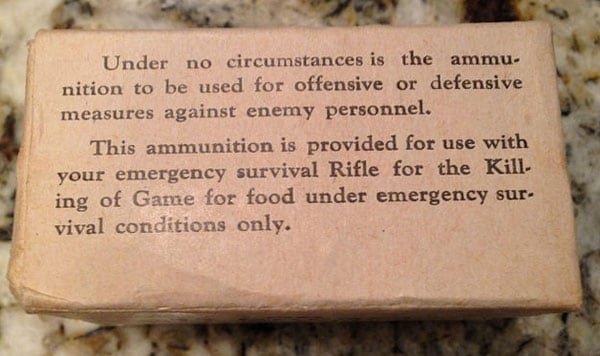 The ammo issued with the M6, like the shotgun shells, were likewise specially made rounds with soft pointed 45-grain bullet. The only problem was, this soft-pointed ammunition was prohibited from use under the laws of war. Considered a ‘dum-dum’ round by the Geneva Convention the packets that the USAF-issue Hornets were shipped in contained a notice that read, “Under no circumstances is the ammunition to be used for offensive or defensive measures against enemy personnel. This ammunition is provided for use with your emergency survival Rifle for the Killing of Game for food under emergency survival conditions only.” Um, OK. 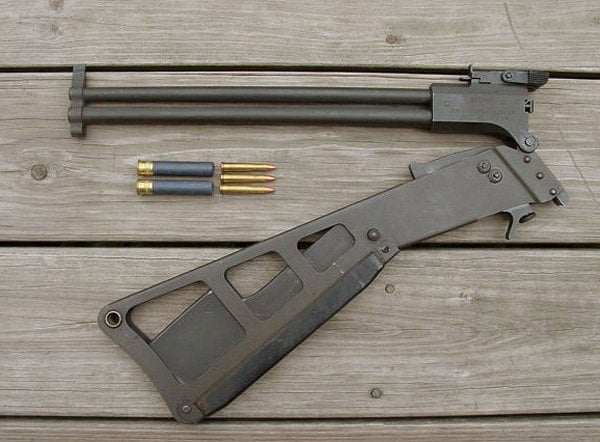 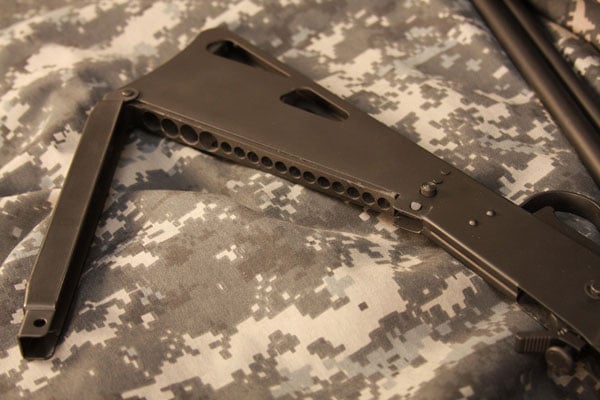 The buttstock held extra rounds in a sealed cartridge box.

Designed to fold neatly under the seat of a B-36 Bomber, C-119 transport or other such plane, the M6 had to be light and compact. Coming it at 3.75-pounds total weight and just 15-inches long when folded, it met that guideline very nicely. This weight included four .410 gauge shotgun shells and nine .22 Hornet cartridges packed in the rear storage box inside the buttstock. Inside said butt-storage box was a small amount of room for matches, fishing line, and other small knick-knacks if desired. There were no wood, rubber, or plastic parts except for the cover of the storage section of the buttstock, the gun being all metal, made from light steel stampings. 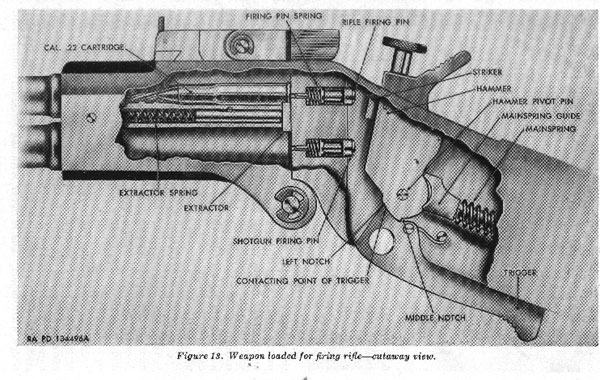 Unlike just about every other rifle or shotgun that uses a hinged or pivoting trigger, the M6 had a trigger lever. This lever had a very stout pull to it, which provided an extra layer of safety. To squeeze the lever, one grips it and presses up with the fingers like a stapler. Aiming was through simple fixed front sights with a rotating rear for either shotgun or rifle, and the single-action hammer had  to be cocked before each shot. A knob atop the hammer selected which barrel to fire.

USAF Ithaca made M6. Note the lack of trigger guard and short barrel.

Type classified as the “Cal.22/.410 Gage Survival Rifle-Shotgun M6,” the weapon was adopted in 1951. Made by the Ithaca Gun Company, it was sold only under military contract placed in sealed survival kits on a wide range of military aircraft that continued in service through the 1970s. While it’s unknown how many have been made, serial number ranges go into the 100,000s.

By the 1980s, the old M6 was out of production for the military for several years. As the planes it equipped were retired from service, a few of the guns made it as surplus to the civilian market and sparked a demand. Athens Arms of Georgia, a small shop focused on NFA guns, started making a new and faithful copy of the old M6 as a transferable SBR. With lots of interest in the handy little gun, Springfield Armory contracted in 1984 with CZ in Czechoslovakia (now the Czech Republic) to make an updated version. 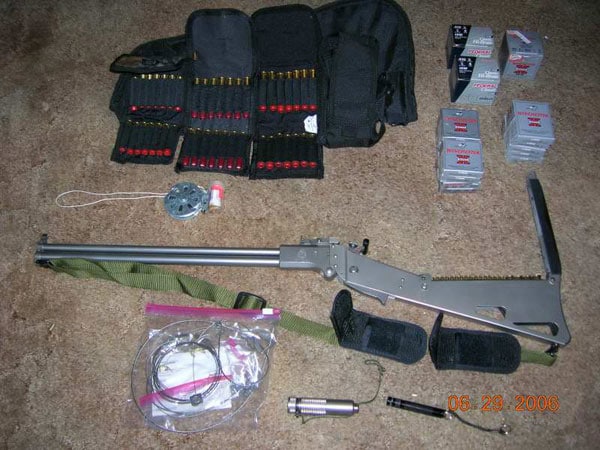 Stainless steel Springfield M6 Scout rifle/shotgun. A part of a balanced breakfast for the modern survivalist.

They had to make some modifications to make it legal (an 18.5-inch barrel rather than the original’s 15), and safe (the addition of a trigger guard) for the general population to give it a second look.

Instead of folding completely in half while still being pinned together, Springfield’s version simply breaks down into two pieces for storage by removing the pin. To add some variety to the line, SA offered their M6 ‘Scout’ in either matte stainless or parkarized black and in either the more popular 22LR or .22 Hornet over .410. In the case of the 22LR models, the gun stored 15 22LR rounds and 4 410s in the buttstock cartridge box.

Overall length was 32-inches assembled, 18.5 packed, and weight loaded was right at 4-pounds. To update the design further (its not 1951 anymore), the Springfield versions also came drilled and tapped for standard Weaver bases.  In the 1990s, these retailed for $179, which was a bargain.

Let’s talk about the elephant in the room and compare the M6 with its biggest rival, the AR-7 the ‘other’ survival gun on the market. Both of these guns aren’t perfect but compared to the AR-7, the M6 has a number of failure points.

AR7 made by AR Industries.

The AR is a repeater with an 8-shot magazine standard. While the M6 folds in half and is very light, the AR7 gets smaller, lighter, and floats (briefly). What the M6 does have going for it is versatility with its .22/.410 combo being able to successfully tackle things that the AR7’s 22LR chambering cannot even attempt. It’s also more basic and reliable, with no reputation as a jam-o-matic like its smaller, floating rival.  To compensate for the later, Springfield models came with an optional lockable marine flotation case to store the gun in the event of a water landing. 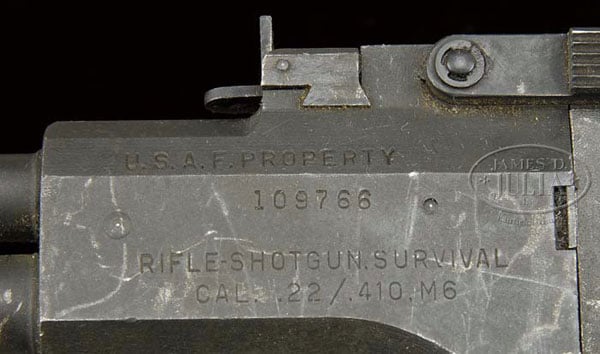 Military-issue M6s going back to the Eisenhower days are rare on the civilian market but do turn up. Unfortunately, they are also all NFA-registered SBRs due to their 14-inch barrels. While, yes, they are extremely collectable martial weapons that can fetch up to $3000, they aren’t your typical sexy SBR by any means. Athens made SBRs are a close second. 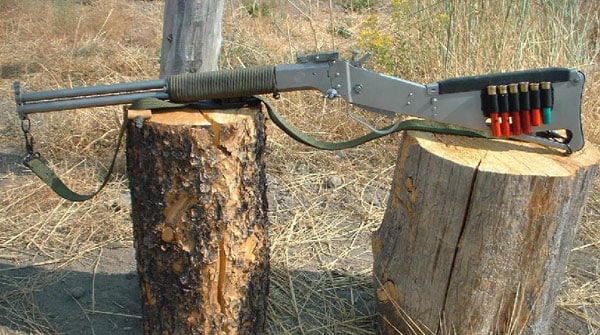 M6 survival rifle with paracord stored as a forearm.

Springfield dropped their M6 Scout series for reasons unknown a few years ago. When looking at picking one of these guns up second-hand, be sure to check the shotgun barrel for bulges, splits, and warps. Occasionally users try to shoot a .45 Long Colt through the .410 barrel with the unintended result of damaging the gun. Needless to say, never shoot a round through a firearm it’s not chambered for. It’s just bad for business.  Used Scouts since then have skyrocketed from a bargain at $200 to nearly $600 today.

Perhaps it’s time for the M6 to make a comeback.