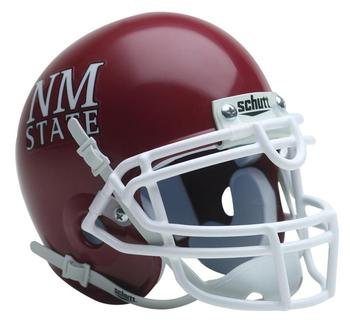 The school decided to revamp their old, uninspiringly plain, maroon helmets – foregoing the oversimplified design for their gun-wielding mascot, Pistol Pete. The helmets also sport the team’s name emblazoned in cool, white lettering. Completing the theme is a white stripe racing down the middle with evenly-spaced, crossed pistols running along its length.

In 2005 the university shied away from Pistol Pete, shorting his name to just “Pete” and substituting his dueling pistols with a much tamer lasso.

Fans were in an upheaval over the change, calling the new mascot “Lasso Larry.” NMSU heard the outcry and one year later responded by bringing Pistol Pete back to all his former glory.

While many teams have a stripe atop their helmets, the New Mexico State Aggies stand apart by dawning something entirely unique: guns.